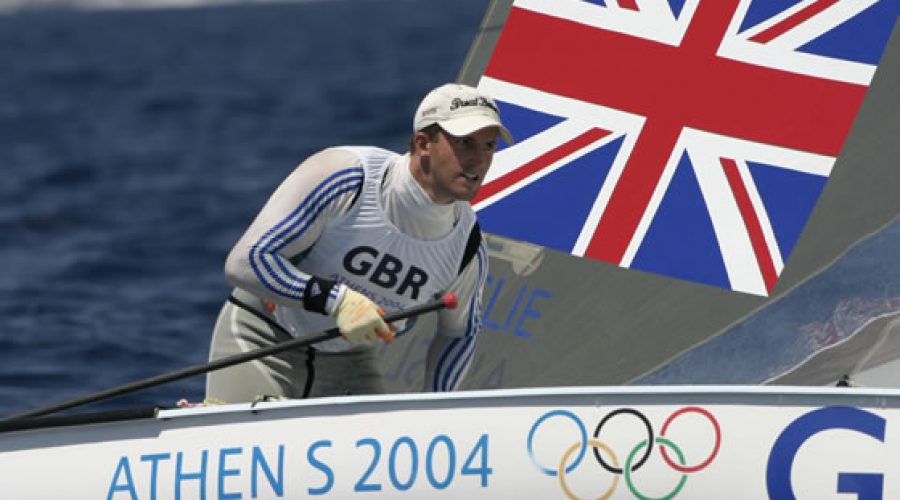 Ben Ainslie sailed his way into the national consciousness when he won a Gold Medal in the Laser class at the Olympic Regatta in Sydney in 2000. But soon after achieving his goal, the Cornwall bred sailor made the switch to the heavier grade Finn dinghy – a class he has dominated ever since. The 29-year-old has now won four Finn world championships and another Gold Medal in the Athens Olympics in 2004. The world-class helmsman has now stepped up to yacht sailing as part of Emirates Team New Zealand Americas Cup team. Ben took a break from training to chat to Adventure Cornwall. Were you surprised to win your fourth successive world title in Moscow last year?
Well I didn’t have the greatest of preparations due to Americas Cup commitments. But I was positive going into the event so, no, it wasn’t a surprise.

Four world titles is a fantastic achievement. What marks you out against your competitors?
I think the biggest aspects to being successful are a strong work ethic and having really good people supporting you.

What’s your greatest or most memorable moment as a competitor?
The Sydney Olympics was my greatest moment in sailing so far. The final race was a showdown with the Brazilian Robert Scheidt who won Gold to my Silver in '96. For the four years between Olympics we had some epic battles and the Sydney final turned out to be no different. After the race there was a protest which lasted for two hours and Scheidt was eventually disqualified, despite issuing the protest himself! It was an amazing moment of relief to realise I had won something so special and after so much effort.

You’re an established world and Olympic champion. What’s next?
I still have Olympic ambitions with Beijing and London, but I am also very focused on the Americas Cup.

How have you found the transition from dinghy sailing to yacht sailing?
The transition has gone quite smoothly and it has really helped that I have been sailing with and been coached by some of the world’s top big boat sailors.

Where’s your favourite place to sail?
Sydney harbour is probably one of the most challenging venues. Cape Town had some massive waves which was fun.

Where do you call home now?
Home at the moment is where ever I am sailing. I don’t own a property so I guess I am a bit of a nomad at present.

What attachment do you have to Cornwall?
I grew up in Cornwall and learned to sail on the Carrick Roads. My parents live near Helford so I get back down to see them as much as possible.

Now that sailing is your job, do you ever sail for fun?
I don’t really count it as a job. I promised myself as a kid I would never sail for financial reasons but because it was what I wanted to achieve.

How do you prepare for a contest?
I try to work out the venue and what will be needed to win and then work on my weak areas.

Do you do any other sports or activities?
I play golf, badly, which is a good mental test. I also play football and touch rugby to help fitness.

What is the biggest challenge facing you as a competitor?
My biggest challenge is that in sailing there is so much to achieve and it is easy to try and do too much. Personally I need to focus on one thing and try to be successful at that.

What are the challenges facing the sport?
Sailing always struggles to be a media friendly sport and to be easy for spectators. I think the sport is certainly being taken more seriously and needs to consolidate its focus onto a few major events.

What advice do you have for youngsters starting out in sailing?
To enjoy your sailing otherwise you’ve already lost and to ask as many questions as possible from the top sailors around you.

Information:
To learn more about Ben or to follow his America’s Cup campaign, visit the sailor’s website at www.benainslie.com