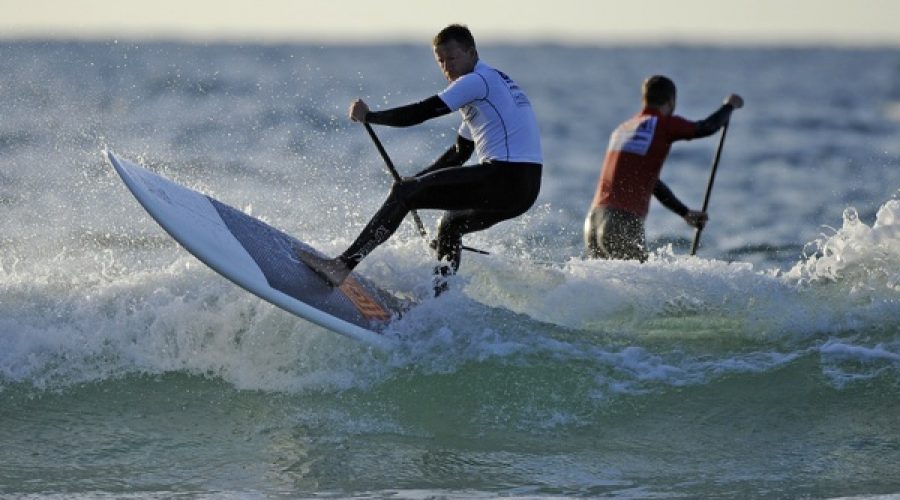 Britain’s best paddle surfers will head to Watergate Bay in October to compete in the British Stand Up Paddleboard Association (BSUPA) National Championships.
Hosted by the Extreme Academy, the fourth year of these national championships will take place on the weekend of 13 and 14 October 2012 with competitions in both surf and distance racing.
Stand up paddle (SUP) boarding has been described as a cross between canoeing and surfing. Riders stand up on a large style of surfboard and use a single bladed paddle to steer, turn and propel themselves through the water.
Organiser Richard Marsh said: “This year we have a really strong, competitive fleet from all over the UK. Each member of the GB team who represented the country in the recent world championships in Peru will be competing in Cornwall.
“Watergate Bay is iconically Cornwall and provides world class conditions for stand up paddle boarding. It is perfect for both competitors and spectators alike and the support that we get from the Extreme Academy and Watergate Bay Hotel is second to none.”
The surfers will take part in different events over the weekend, with divisions for men, women and juniors. Wave-riding skills will be tested on Saturday 13 October in a performance surfing competition. Sunday 14 October will see a 5km long-distance ocean paddle race requiring technique, skill and stamina.
The Wave Expression competition, sponsored by eco-fashion clothing company Rapanui, will take place on Sunday 14 October. The surfers are given a set period of time to try and catch the most impressive wave to win.
New to this year is the Battle of the Paddle competition. Competitors follow a set circuit which includes both paddling and beach running. Richard added: “We have introduced this event to follow the competition format that is used in other parts of the world. Its addition means there is more for the spectators to enjoy as they can be close up to the action.”
Competitors will also be battling for the coveted Watergate Bay Waterman title. Sponsored by The Beach Hut, the award is presented to the person with the highest combined score over the two events.
Last year’s winner Gareth Grant will be returning to the event and hoping to defend his title. He said: “Watergate Bay has a really cool, friendly vibe and it’s a great event to compete in, attracting the best stand up paddlers from around the UK.
“A lot of banter and sledging has been going around about who is going to win this year. There is a bit of added pressure being the current champion, but I feel fairly relaxed because if I don’t win, I know that I have won it before. There are a lot of juniors and up and coming SUP boarders making their mark, so stay tuned, its going to be very competitive. This is the SUP competition to win!”
Gareth will also be jointly running a coaching day with BSUPA Joint Head Coach Simon Bassett on Friday 12 October. The two sessions are aimed at intermediate to advanced SUP boarders who are looking to improve their skills and knowledge of competitive stand up paddle surfing.
This year, the titles gained by competitors will count towards the GB team selection for next year’s ISA World Championships in Peru.
Other sponsors of the event include Indo Board, Nah Skwell, Nalu Beads, Rapanui, X-Paddle, Prosport Sunscreen, XM Surf Leashes, Sk8pole, Traditional Surfing Co, Whiskeyjack Paddles, Surf Life Saving GB, ActionVan and SUP Global Magazine.
For more information about the event visit www.ipaddleboard.co.uk