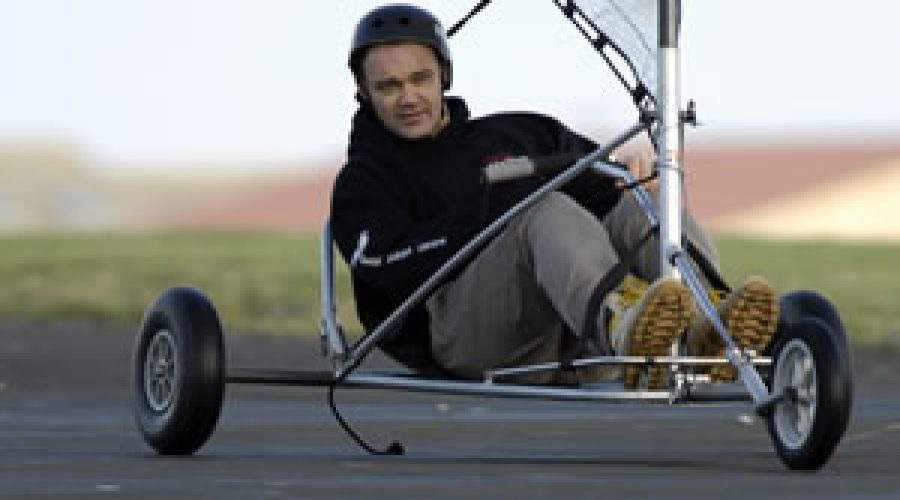 A Cornish man became the fastest man in Europe in a Blokart when he broke the speed record during a stormy session at Perranporth airfield.

Kevin Meyers, who famously crossed the Gobi Desert by Blokart last year, headed out onto the exposed airfield on a particularly blustery day to see how fast he could go.

Just getting started in such ferocious conditions proved a challenge but Kevin was soon clocking up top speeds as recorded by his on-board GPS.

Kevin takes up the story:

“I decided to bear away down runway 027 on a broad reach that gave incredible acceleration but it was actually very stable – glancing at the handlebar mounted GPS I knew I was over 40mph. Then I let go of the sail and turned up 01 with both hands on the bar and made it easily to 43mph.

“That was fun – round we go and after a noisy beat back up I bear away down the strip again with rain painful on my face. Round the corner again and hey presto 50.5mph! Past the UK record by just a half mile per hour.

Having conquered the European speed record, Kevin now has his sights set on the 2008 Blokart Open in Nevada Desert in March.

As the UK number one heavyweight Blokart racer for the last three years, Kevin is in a strong position to take on the world’s best Blokarters at the contest in Ivanpah just south of Las Vegas. He will be hoping to scoop a medal or two, and maybe even break some more records!

Kevin is currently seeking sponsors to help him compete at this event. Anyone interested in sponsoring the champion Blokarter should contact Kevin on klcmeyers@aol.com