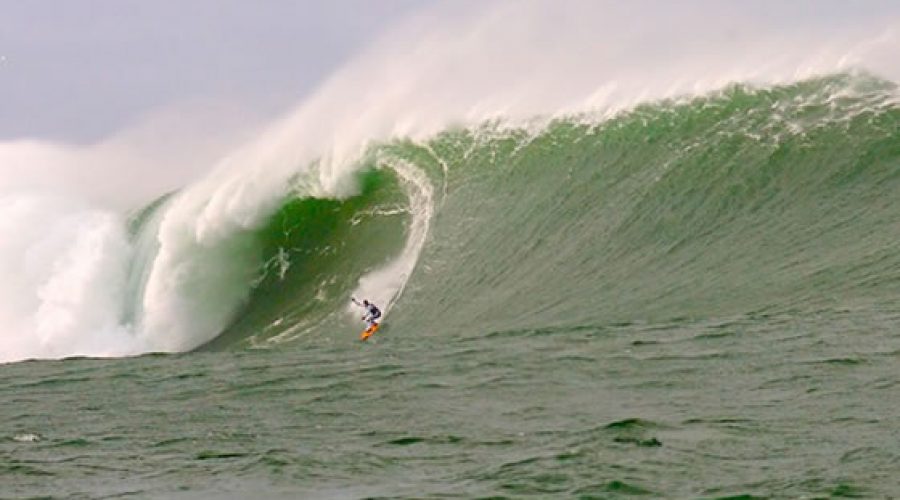 Friday afternoon saw unusually pleasant conditions in Donegal Bay, and the swell teased in steadily from 3ft at noon, to 6ft at 2pm, with a couple of 15 ft forerunners slipping in ahead of the brunt of the swell.

Nearshore models forecasted 38ft significant wave height at an 18 second period for noon Saturday. However, by 2am, the Galway M1 buoys were already showing 48ft readings – it was destined to be gargantuan.

At 5 am, Mennie, Scott and water photographer Tony Plant shivered on the cliffs overlooking the break, peering westwards into the pressing darkness of the North Atlantic. The inky murk revealed enough to confirm both the swell’s grandiose arrival, and unquestionable magnitude. That final, ever-confounding Irish variable – the fickle and relentless wind, were momentarily holding favourably at a south westerly direction, allowing just enough wind-shadowing by the headland to make the high-speed jetski approach tenable. Often at Mullaghmore, waist-high ribs and cross-chops confound even the most experienced jetski driver’s approach.

The submarine bathymetry of Mullaghmore is equally complex and formidable, focussing open ocean swells onto a series of step-laddering shelves submerged off the headland. ts’ final plateau wedges rapidly from 33 meters, to 13 metres onto the underwater ledge, with the wave apexing top to bottom into 4.6 metres over the takeoff boils. In bathymetry or hydrology, that’s an imposing equation. In reality, with the biggest ever recorded swell running, it is simply terrifying.

Even under these conditions, Mullaghmore showed no signs of overload. If anything, the wave seemed to shape up better the bigger the swell.

As the crew headed out and got settled in, a turbulent stormfront, lashed with forked lightning, gradually massed on the horizon. There would be a short window of rideable opportunity for this swell, and the boys would not waste it. The session kicked into overdrive on with a bomb ridden by Alistair Mennie. At 6’5” tall, it takes a hefty wave to make Al appear Lilliputlian, and the subsequent consensus amongst the surfers identified it as the biggest wave ridden on the record-breaking day. It was a fitting gift bestowed on Ireland’s most dedicated big-wave rider and Eddie Aikau-list nominee.

Shortly thereafter, it was Ritchie Fitzgerald’s turn to cause heart palpitations for all observers. Coming in from too deep behind the peak, a 50-yard section dump-trucked over him, thrusting him deep downwards.

“I was pushed down over a ledge and so deep, even with the impact vest on, that when I swam for the light, it still took six breaststrokes to break the surface. Thankfully, Gabe was only a few feet away from me with the jetski,” exclaimed the affable Fitzgerald.

The surfers rotated through the thundering sets over the next two hours, challenging both their personal abilities, and any preconceived notions of wave height limits of the Irish and British coastlines. By all accounts, the teams rode many of the biggest, most memorable waves of their well-travelled surfing careers.

The highlights reel was further marked by Gabe Davies, who somehow finessed his way through a frothing, whitewater cascade on a bomb, to end his session on a high note. cott adopted a simple approach: “Go left. Go fast. Don’t die!” which seemed to work for him, as he has penned these words. With adverse winds, lightning strikes and burnt-out thighs slowing down the session after a few intense hours, the flotilla headed safely homewards.

It seemed fitting that they had been joined for this session by intrepid water photographers Tony Plant, and the inimitable Mickey Smith, himself a pioneer of many recent Irish heavy-water discoveries. Safety ski driver Dylan Prickett also kept a watchful eye on the assembled watermen, and the surfers’ steady communications with the local Coast Guards under Small Craft Warning conditions will assist in keeping this remarkable location open to towsurfers in the future.

Despite the numerical significance of this record-breaking swell and session, the lasting satisfactions where a little more subtle, and personal. Davies and Fitzgerald had started their initial towsurfing attempts here together, and reuniting for this session culminated in them riding the best waves of their lives. For Ritchie Fitzgerald, the opportunity to charge his neighbourhood break in once-in-a-lifetime form with friends, provided a huge dose of stoke in an otherwise testing year for the Fitzgerald clan. For the ginger giant Alistair Mennie, it was an overdue reward for great commitment. He’d logged hundreds of hours of driving, both in a van and on a jetski, cold nights of overnight parking in lay-byes and boat harbours – all in making good on his vow to never miss a big swell anywhere in Ireland. Having sacrificed one jetski at Mullaghmore before in a training session with Andrew Cotton, the 1 December mega-swell rewarded him with the setting of a new benchmark in British and Irish big-wave surfing.

With widespread interest already generated by the recent discovery of ‘Aileens,’ the formidable right-hander under the Cliffs of Moher in County Clare, the re-eruption of Mullaghmore has further laid down the Irish mantle as a legitimate heavy-water destination, with much untapped potential. With surfers from Jersey to Johanna now clutching tenuously at Irish roots and booking flights to Dublin International, the enduring question begs answering: When will the Emerald Isle get this good again?

As an Irish surf-themed Guinness advert sagely proclaims, ‘Good things come to those who wait.’

The surfers would like to dedicate this session to the loving memories of Richard Fitzgerald Senior and Nolan McSkimming, and to the speedy recovery of Cape Town towsurfer Glenn Bee.

To see video footage of the surfers in action in Ireland, click on the following links: