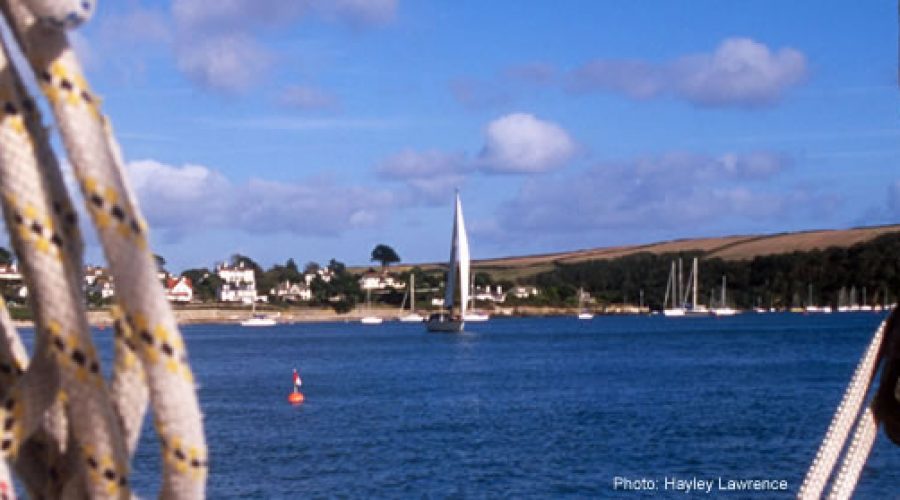 Hammering along at almost ten knots, the deck keeled over at a 90° angle in the house-high swell. I ditched the fantasy of sunset sailing with a G&T in hand and reached for the seasickness pills. Torrents of water sprayed the decks, firing icy pellets at my wind-scorched cheeks. Sailing in Cornwall wasn’t proving to be as close to cruising in the Med as I’d been led to believe. Quite frankly we could have been anywhere. Not a bar of land in sight, the bow of the boat and the belly of the sails were shrouded by impenetrable sea mist.

According to the skipper we were heading for Fowey. Pummelled by wind, rain and sheer adrenalin, I focussed on the compass bearing and fought the bellows of power that tried to whisk the helm out of my control. On day two of a Competent Crew course, conditions dictated that we took the fast track to seamanship. But whilst the wind gods were blowing a hoolie and the weather pulled its bleakest, most miserable face, Mevagissey chose to peep out of the grey through the eye of a rainbow. And at that very moment I was struck by the utter beauty of sailing, and its potential for adventure and coastal exploration.

A stickler for adrenalin sports and the untamed beaches of the north coast, it was in moment of surrender to my inner-yachtie that I’d climbed aboard the 40-foot Barolo and set out to explore the ‘softer’ south coast. Like many who swap dry land for the high seas, one of the key attractions to sailing was a love of the ocean, travel and raw adventure. But this was no sport for softies. On the second of five days onboard, I was absolutely blown away by the speed and intensity of the action. Hauling ropes, dropping anchors, reefing sails and manning the helm all worked more than enough muscle to deserve a few cold beers at the end of each day at sea.

Whether you are a complete beginner or an expert, Cornwall is a sailor’s wet dream. There’s water, water everywhere, and maritime culture oozes from secret smugglers coves to bustling harbours where sleek yachts and traditional sailing boats fight for the last few moorings. A virgin to the mother tongue of the yachting world, at first I’d chased the sailing terminology around various parts of the deck… “cleats, halyards, bowline, sheets, genoa…” But soon after we cast off, the terms teed up with the boat’s apparatus, much of which we were handling within minutes of being at sea.

“Jibe-oh”, I hollered to the crew as I swung the bow… “Or should that be lee-ho?” Still getting to grips with the basic manoeuvres, it put a bit of a dampener on the romantic notion of sailing around the world just yet. It was going to take more than a week’s experience to be competent in one of the world’s most un-chartered territories. Wind direction, sail handling, weather forecasting and navigation are all crucial to survival on the open seas. Suddenly Ellen MacArthur’s feats soared up my barometer of impressive human accomplishments.

Our skipper Bob was no stranger to the spirit of adventure that sailing encompasses. He’d thrown-in the towel on his former life when he sold his business to pursue a passion for sailing in 1990. With his partner Denise, he spent years mastering the art of life afloat, making a wedge doing yacht deliveries and instructing in the UK and the Med.

“Falmouth wove an invisible thread that was attached to our boat and eventually we gave in and settled here”, Bob explained. “The coastline is spectacular; the Carrick Roads provide shelter and scope for exploration and the South West offers challenging pilotage. Where else could you find the variation in coastline that exists between Falmouth and the Isles of Scilly? The historical resonance, quality of light and the mystique of legends make sailing here totally unique.”

With the first exhilarating passage under my belt, I was beginning to understand his addiction to this world-class sailing region and was already conjuring up plans to exchange life on dry land for an oceanic adventure. Sailing in Cornwall is not only a perfect marriage with adrenalin in the great outdoors, but it transpired to be one the best means of exploring the treasures of the coast.

For the duration of these five days our tour under sail took us from the thriving maritime centres of Falmouth and Fowey, to the serene and secret coves of the Helford River and Lizard Peninsula. From the waterlogged playground of the Carrick Roads, to the shelter of the enchanting Fowey River and the ramps of the open seas, I was introduced to an ocean-fringed view of Cornwall from the sea.

Our view of the coast was one seen through the eyes of many smugglers and sailors of yesteryear – and it was one that captured the essence of the county from a perspective that it’s impossible to experience from a wetsuit or walking boots. And as I learned basic navigation techniques on route, I was able to identify a smattering of beaches and sections of the coast path as yet untrammelled by my muddy boots.

Picking up moorings, trimming, tacking and motoring, our sailing skills swiftly developed and adapted to suit the prevailing weather conditions. Crossing barriers that no other sport can parallel, sailing harnesses the elements and is a joyous education for any ocean-going spirit. Even at night we learned to steer Barolo through the waves under a star-ridden sky, navigating past the shadows of the coast using only flashing buoys and the glow of the compass.

After less than a week at sea I can only agree that Cornwall boasts some of the most beautiful and diverse sailing territory on its doorstep. On a smooth run to the Lizard we named the beaches from Falmouth to Porthallow, sailed around the treacherous Manacles where many sailors have perished, and dropped anchor in the turquoise waters of Coverack. The sea cradled by the tiny harbour looked so inviting that, had the temperature been nudged up a degree, I could have dived off the deck and taken the plunge with some snorkelling gear. It was here that sailing in Cornwall crept a knot closer to an idyllic scene in the Mediterranean. But who needs sun-kissed cruising when you’ve got adrenalin-fuelled adventure off the south coast of Cornwall?