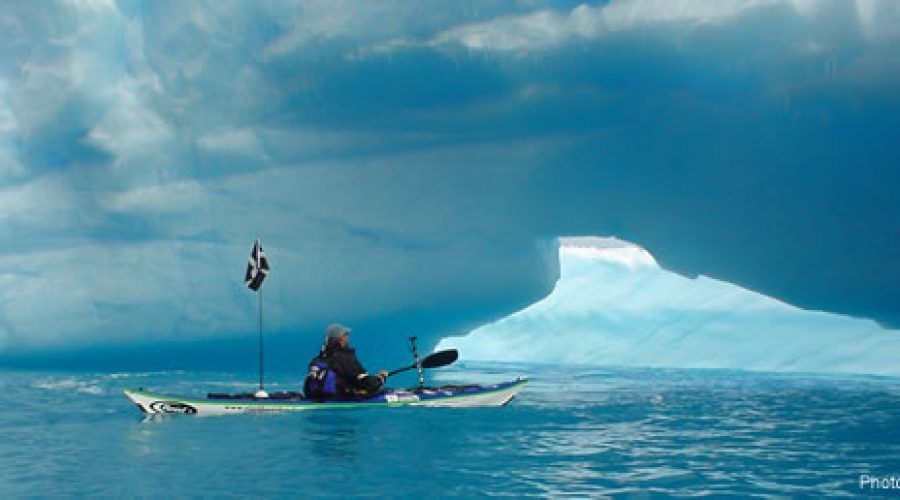 Cracking the Ice of Kayaking

Mariners say that in the Roaring Forties there is no law, but in the Furious Fifties there is no God. I think we could dispute that. Our journey took us to the heart of this harshest of latitudes and God, or Mother Nature, according to your own beliefs, certainly smiled upon us. For four glorious days anyway, the rest of the time she most definitely let us know she was there.

The expedition started, as most things do, in a pub, as we sat sipping a beer in The Chainlocker in Falmouth. Pete Bray had recently survived a mid-Atlantic hurricane, which broke his boat in two and left him stranded 300 miles off Lands End, during an attempt to break the world record for rowing across the ocean. I said, “How do you fancy having a crack at South Georgia? They’re calling it the K2 (tough Himalayan mountain) of sea kayaking.” He was hooked from the start, ever up for a new adventure.

It’s important on an expedition of this nature that the team dynamics are right. Both Pete and I, being a part of the NDK sponsored paddlers program, felt it was only right that we spoke to Nigel Dennis about our plans. He was instantly interested, not just in supplying us boats but he wanted to come too. When it came to a fourth member for the journey, we needed someone who we’d be happy spending extended time with on a remote and inhospitable shore, and top female paddler Hadas Feldman was the first choice. We also employed the services of Jim Rowlinson to help organise the trip.

Fearsome Conditions
South Georgia is a remote island, which stands alone in the Southern Ocean, slap bang in the middle of the Furious Fifties. First discovered in 1675, the island was claimed for the Crown when Captain Cook landed in 1775. It became a major whaling station but hit the spotlight at the turn of the last century when Sir Ernest Shackleton managed to land at King Haakon Bay, after experiencing horrendous conditions that almost claimed the lives of the entire crew of the Endeavor during their fated attempt on the South Pole.

Its fearsome reputation meant that kayakers have had an eye on South Georgia for quite a few years. Several expeditions had tried before and failed. One team got in such a pickle they had to be rescued by the Royal Navy, and ever since then the South Georgian Government has stipulated that any attempt must have its own support vessel. Skip Novak’s vessel Pelagic Australis was ideal for the job, but at £1,200 per day we were going to need some corporate sponsorship behind us. Enter Templar Films. They were happy to get involved in a project of this size and caliber, and it wasn’t long before we were heading south.

The journey down to South Georgia was epic in itself. London to Madrid, Madrid to Santiago, Santiago to Punta Arenas, then Punta Arenas to Port Stanley. That was the easy bit over; we now had a 4-5 day sail from the Falklands down to Grytvicken. Just as we rounded Cape Pembroke we felt the full might of the Southern Ocean, 14-metre seas breaking across the decks left several members of the team emptying the ingredients of the previous night’s supper.

Untamed Wilderness
Our first sight of South Georgia was incredible. It was just as the books say. Cut off the top half of the Alps and lay it down at sea level and you have a perfect picture of what greeted us. We had passed several icebergs, a Sperm Whale, schools of Comisons Dolphins and several breeds of Albatross and now as we approached the island we were beginning to see the odd fur seal. The sun came up and we were spell bound. Mountains and glaciers all set in front of a blood red sky.

We arrived at Grytviken at about 7.30am, by 9am we had received the standard briefing given to all visitors visiting the island. Rules and regulations abound, all serving to protect the unique bio-diversity and rich wildlife. By 2.30pm of the same day we were launching our Explorers and paddling out of the harbour, passing Shackleton’s Cross on the way. The weather was looking good. When I say good that means anything force five and under. Weather systems move through the Southern Ocean at an alarmingly fast speed and you seize the opportunities as they arrive.

The crux of our challenge, if you can call it that, is that South Georgia’s south coast is regarded as probably the most dangerous lee shore on the planet. The North coast is no picnic either. Here the threat wasn’t so much of hazardous surf landings, but more of being blown offshore, and believe me Australia is a long way away. Katabatic winds blow regularly down off the mountains and glaciers, which adorn the entire length of the island.

Paddling with Penguins
By early evening we had arrived at Leith Harbour, the first of several, long abandoned whaling stations we would pass. We had been warned to avoid, where possible, the Furries (fur seals), which are so territorial during the breeding and pupping season that they will defend their territory to the death. So we took full advantage of our support vessel when the beaches were full of seals. It took us six days to reach Elsehul. Twice in those six days we got caught by winds in excess of 40 knots. Pete was literally blown over, forcing him to roll, when the first gust came through and we found ourselves struggling for more than an hour just to gain one mile, seeking shelter in Right Whale Bay.

Day seven and we were about to embark on the south coast. This is where God or Mother Nature decided to smile down on us. Four days of beautiful weather kept us pumping out the miles, but not so fast that we didn’t take the opportunity to view this seldom travelled coastline. The water was icy cold and we had brash ice to navigate through, taking chunks indiscriminately from the blades of our paddles. Glaciers calved regularly and not far offshore a constant march of icebergs floated by in all their glory.

As we got closer to Cape Disappointment the seal population started to thin out and we took the opportunity to camp more often. Exiting the kayaks at the end of the day was a joy, once we managed to thaw our legs out that was. With numb fingers, we fumbled for the grab loop on a spray deck and then tried to operate the small levers on our whisperlights, eagerly awaiting a hot brew. We awoke one morning to find our camp lightly covered in fresh snow, and our kayaks coveted by Elephant seal pups. These gentle giants were a constant source of entertainment, unless it was a bull male of course. Several tonnes of muscle and exceedingly large teeth meant you gave these guys lots of respect. The penguins however were the real characters, hobbling away as you passed them, only to hobble back minutes later, curious to find out just who you were. Gentoo, Emperors, Adelie and Chinstraps were all there to entertain us.

Savage Winds
We rounded Cape Disappointment and started paddling north again. We got as far as Drygalski Fjord when we got hit by our first strong wind in four days – 30 knots threatening to push us out beyond Cooper Island. Head down, push forward, attack the wind, it’s the only way. Resting on the other side, and filling our bellies full of energy, it wasn’t long before we were back out on the water, making it as far as Coopers Bay by nightfall.

We were starting to pass cruise ships now. This is a major stopover for anyone heading down to Antarctica, and as we ventured further north the more we would see. We paddled around Cape Charlotte, hoping to cross Royal Bay, and land before nightfall. This wasn’t to be. We got hit by winds so strong that none of us could recall ever being out on the water in a kayak in such conditions. In a sheltered anchorage at Moltke Harbour, we recorded winds in excess of 45 knots, so who knows what it was out on the headland. Spray streaming horizontally from the tumbling crests of water made it difficult to breathe, we made an emergency landing on a small beach just around the headland and called it a day.

We knew as we arose early the next morning that this might well be our last day on the water, weather permitting. We were just thirty miles now from our finish point, a relatively easy day’s paddling in normal conditions. We set out at 7am and by midday we had covered a good 15 miles, things were looking good. We met up with the Pelagic in Cobblers Cove with just ten more miles to go. Gusts of wind however were attempting to push us back, so we moved in close to the cliffs, trying to read the squall lines in the poor visibility, sprinting for cover as they approached. As we rounded Barff Point and paddled into Cumberland Bay, we were met by a snow blizzard head on. In zero visibility we took a bearing to King Edward Point and stayed close together and for the last time gritted our teeth, leant forward and paddled on.

The first we knew we’d arrived was as the flares went up and the sound of a solo saxophonist could be faintly heard competing with the wind. We’d done it. We had circumnavigated South Georgia in just 13 days and 8 hours. Not only was this a first for Britain but it was also the fastest ever kayak journey around the island. We hadn’t meant to do it that fast, honestly, but we’d been given a good weather window for our paddle along the south coast. Mother Nature had given us a gift and there was no way we’d have turned it down. 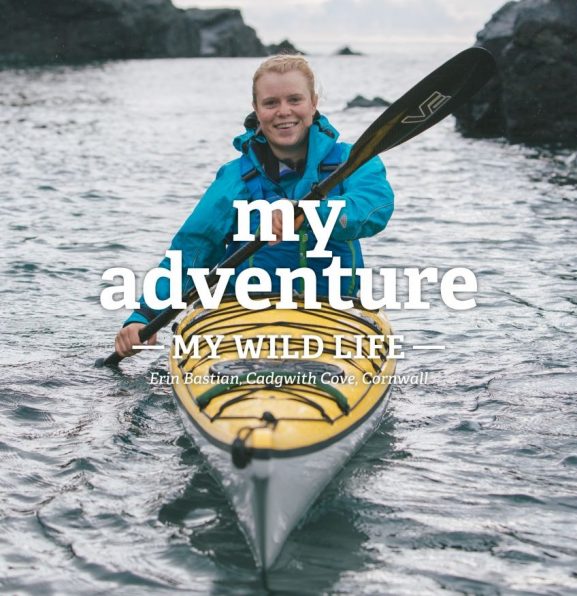 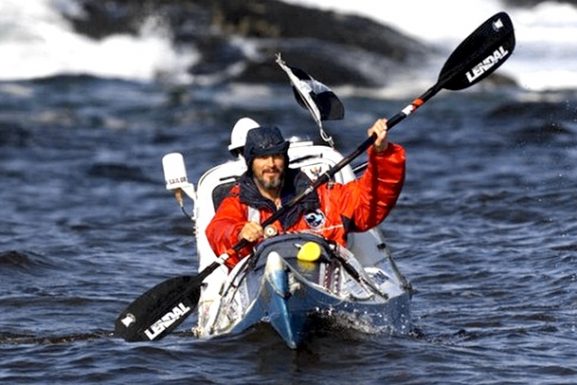