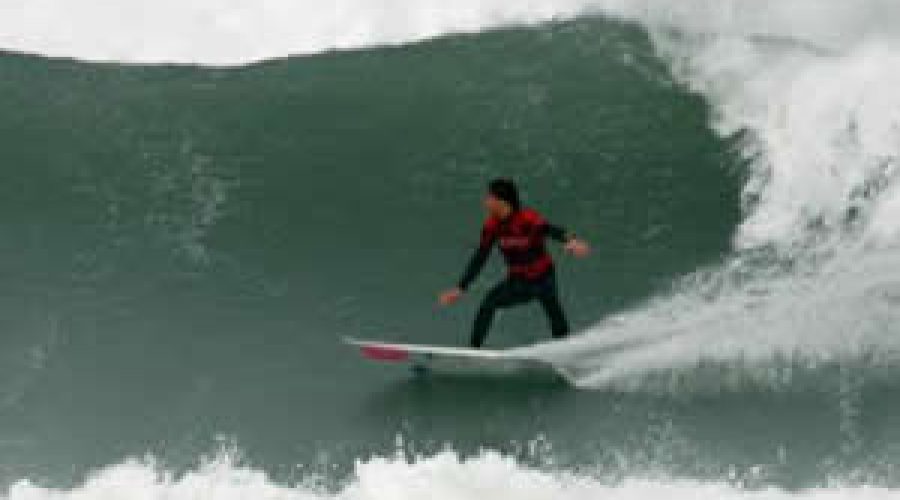 Andrew Griffin from Newquay won the Bude Surf Classic  in challenging conditions at Widemouth Bay. He progressed ahead of 100 other to win the surf contest organised by Christian Surfers with the support Bude Surf Outreach group and other sponsors.

Forecasts during the week had been changing daily and it was clear by the end of the week the low pressure spinning over the South West was going to cook up quite a storm and present some tricky conditions for all involved.

As the tide on Saturday dropped, conditions deteriorated, with gale force winds and increasing surf size. After only the first round of grommets heats completed Phil Williams (Contest Director) felt it wise to put the contest on hold till Sunday morning.

Despite a very stormy night, by Sunday morning at 7.00am the organisers were greeted with sunshine, cross/off shore winds and 3 – 4 ft of surf.

Newquay’s Ben Skinner showed us all why he is one of the world’s best longboarders coming first in the Longboard division, despite breaking his board in the semi-final. Nathan Carter from Bude came 2nd just ahead of Angus Murray from Buckfastleigh, with Newquay’s Gary Woodward coming in fourth.

The Junior final was a very close fight between George Picking (Newquay) and Toby Donachie (St Merryn), with George taking the win, despite Toby looking the favourite throughout the contest. Zak Lawton from Croyde took 3rd and Josh Daniel from Hayle came 4th.

The Under 14’s category ( Grommets ) had the biggest entry with 27 competitors. They amazed everyone by taking on the challenging waves and impressed all with the quality of surfing. Miles Lee-Hargeaves (Bournemouth) sneaked the win by 0.2 points  ahead of Jobe Harris. Lee also took home the Dick Willoughby Cup, given to the most outstanding grom. Harry Timson couldn’t match his 9.3 ride in round one and took 3rd with Liam Turner taking 4th.

The bodyboard division was won by Danny Catten from Portreath ahead of Phil Milson who had travelled all the way form Oxford.

Contest Director Phil Williams, head of Christian Surfers UK, said: “A big thanks to the competitors for bearing with the organisers during a very challenging couple of days and competing in some tough conditions. The attitude of all attending was brilliant.  Also a big thanks to the lifeguards, Cornwall council for allowing use of the beach, and the surfers of Widemouth area for sharing their waves with us."

Christian Surfers UK will be supporting numerous other events throughout the year as well as organising the Jesus Surf Classic in Croyde (Sept 12th – 13th), and the Jesus Longboard Classic in Polzeath (Oct 10th – 11th). For more details log on to www.christiansurfers.co.uk.