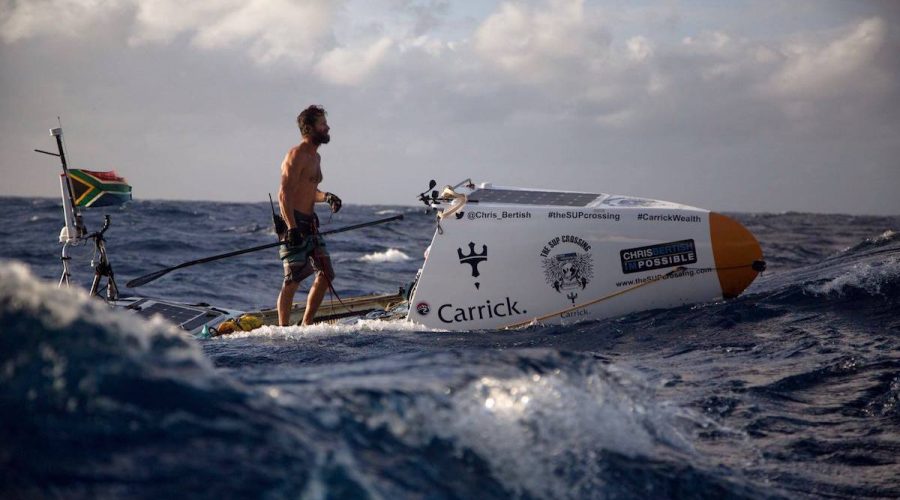 Chris Bertish became the first person to cross the Atlantic Ocean on a stand-up paddleboard when he landed in Antigua in March after successfully completing a 4,050-mile voyage alone at sea.

The South African surfer, who lived in Newquay for several years, secured his place in the history books with his epic journey which took three months to complete.

The 42-year-old  started the journey in Agadir, Morocco, and arrived in Antigua 93 later.  In his last “captain’s log” posted on Facebook around an hour before his challenge was over, Bertish said: “It’s my primal element of courage, belief and strength for my purpose that has got me through to this exact moment, across more than 7500km, hazardous and treacherous open ocean.. Across the entire Atlantic Ocean and I am finally here, I am here & and I don’t need to be strong and keep it together any longer, it’s been 93 days and it’s done and I let it all go… I am home!”

Bertish is best known as a big wave surfer who trained on waves around Cornwall, including the Cribbar, before going on to compete and win in big wave contests around the world. He famously won the Mavericks Big Wave Invitational at Half Moon Bay, California in 2010, ahead of an elite crew of surfers from around the world.

It’s estimated that Bertish made two million paddle strokes during the cross-Atlantic trip. His ‘board’ and refuge for the journey was a custom-built 20ft-long board that cost $120,000 (£99,000) and took six months to build. He slept in a small cabin at the front of the craft, which also served as a storage space for his weather forecasting equipment and GPS systems.

During the unparalleled adventure, Bertish had to contend with storms, sharks and equipment failures, as well as the sheer loneliness that is part of being solo at sea on such a long voyage.

During a mid-ocean phone call in February, Bertish discussed how he learned to cope, one day at a time. “I don’t consider this to be a SUP adventure anymore,” he said. “It has become the ultimate waterman project, using all my knowledge from everything to do with my saving, my navigation, my surveying, my surfing and being comfortable in giant storms and big waves. Dealing with everything you could possibly imagine and more and still staying positive and proactive to get through it, one challenge at a time.”

See this video which is a trailer for an upcoming documentary on the adventure:

Chris paddled an average of 43 miles a day, beating his plan for 30 miles daily, and kept well nourished with protein shakes, freeze-dried meals and salty jerky. He mostly travelled at night to avoid sun exposure and managed a gruelling 60 miles on the penultimate day to make the final push into English Harbour in Antigua where he was greeted by family and friends.

His incredible achievement comes after Frenchman Nicolas Jarossay attempted an Atlantic crossing by paddleboard last year. He was rescued one night into the journey after his craft capsized.

Chris took on the epic challenge to raise money for Signature of Hope Trust, the Lunchbox Foundation and Operation Smile, which has so far amassed £339,000. He aims to raise enough money to build at least five schools in South Africa, provide monthly dividends to feed and educate thousands of children and pay for surgeons to carry out life-changing cleft lip and palate operations.

Chris said, shortly after stepping on dry land in Antigua for the first time in three months: “People talk about the challenges in life and how you get through it. You just break everything down, by the minute, by the hour. You just have to believe in yourself.”

For more information see the Chris Bertish website or visit The SUP Crossing.