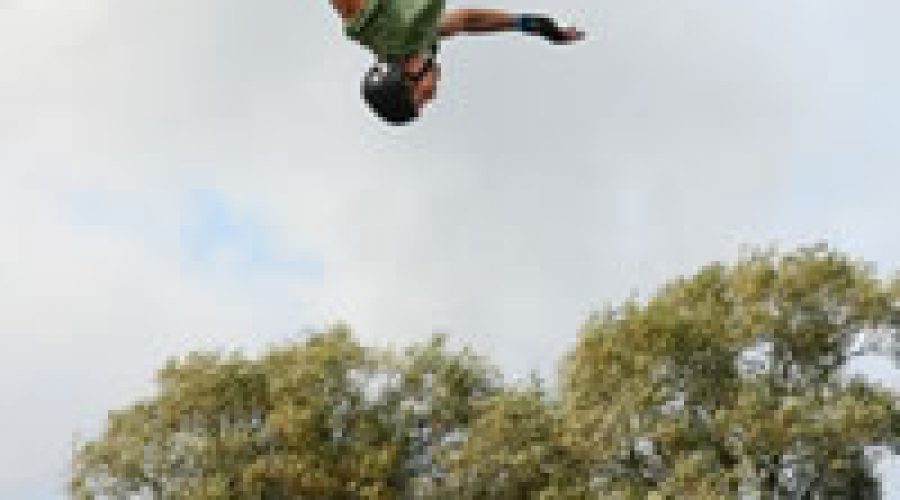 21 year old Tom Kirkman from Cornwall, England, has claimed the world number one title in the prestigious Mountainboard World Freestyle Championship after a stunning display of tricks at the international event held at Bugs Boarding Mountainboard Centre in Gloucestershire.
In competition, Kirkman was in a league of his own, landing tricks such as 720 rotations, back flips and even stomping several flawless switch rodeos over the biggest 40ft dirt jumps to take home the title of World Freestyle Champion 2009.
Winning the title and walking away with the cash prize was a great achievement for the Cornish champion whose outstanding performance comes after recent surgery and a year out from Mountainboarding due to an ankle injury.
The event saw the world’s best riders from several countries battling it out to be crowned world number one, yet it was two more UK riders who clinched the remaining podium positions. Tom Read, 19, from Malvern rode away with second place after displaying a stylish bag of tricks such as 720 rotations, corked 540 rotations and front flips.
Third place went to the 2008 UK freestyle champion, Joe Dickson, 20, from Hereford, who attempted the never-seen-before double back flip on his final run, Joe said: “As a local rider to Bugs Boarding it was great to try the double back flip in front of a home crowd. I didn’t land it but hopefully I’ll stomp it soon and go for gold at the 2010 World Freestyle Championships!”
Bugs Boarding event organiser and MBS Europe team manager, AJ Watkins commented: “The event was another great success for the UK mountainboard scene. All the riders gave it their best shot and we saw some of the biggest, best and most technical tricks ever attempted. It’s awesome to have all the podium places claimed by MBS Europe sponsored UK riders, the guys deserve their titles and I can’t wait to see what next year brings.”