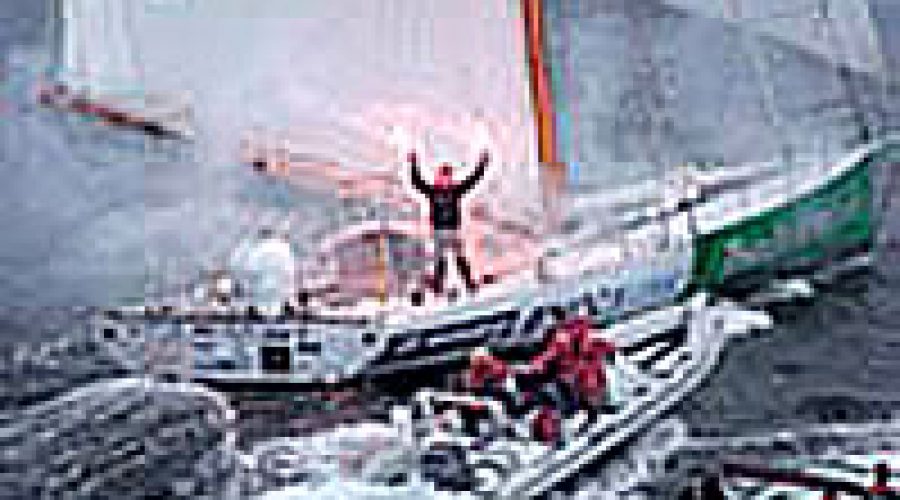 17 year-old British sailor Mike Perham returned to Portsmouth on Saturday 29th August to a hero’s welcome from his parents Peter and Heather Perham, sister Fiona, and thousands of friends and well-wishers, after becoming the youngest person to sail single-handed around the world. His 50ft yacht Totallymoney.com  had crossed the traditional Lizard/Ushant line marking the start and finish point of his 30,000 mile record-setting solo sailing circumnavigation at 09: 47.30BST on Thursday 27th August – two months inside the previous age record set by American teenager Zac Sunderland. Portsmouth however, marked the start and finish point of this 9 month odyssey, for Mark Perham set out from Gunwharf Quay on 15th November 2008. Aged 17 years, 164 days old when he set the record, the teenager from Potters Bar, Hertfordshire was escorted up the Solent today by the Royal Navy guard ship HMS Puncher, and a flotilla of boats.
Mike said: “I’ve made it, I’ve made my dream come true and it feels amazing. A BIG BIG thanks to my Dad, Mum, all the sponsors and everyone who has helped me along the way. I can’t believe that the Royal Navy has sent HMS Mersey and a helicopter to witness my crossing the line. I feel very honoured.”
Mike’s Dad said: “Mike is a very special son, he has done incredibly well. He has shown that with determination, you can succeed even in the most adverse circumstances. He has shown the world that he is an extraordinary young man and an inspiration to us all.”
Mike’s story has been filmed for Channel 4’s documentary series Cutting Edge. Dangerous Seas For Boys follows Mike’s primeval struggle with nature as he films his time at sea, combined with the poignant family saga of his parents and friends eagerly following his journey from dry land.  The film will broadcast on Channel 4 in November.
To read this daily insight on the last leg of Mike’s remarkable voyage, visit www.totallymoney.com/sailmike Money raised by Mike during the 30,000-mile voyage is being donated to Save the Children and the Tall Ships Youth Trust.