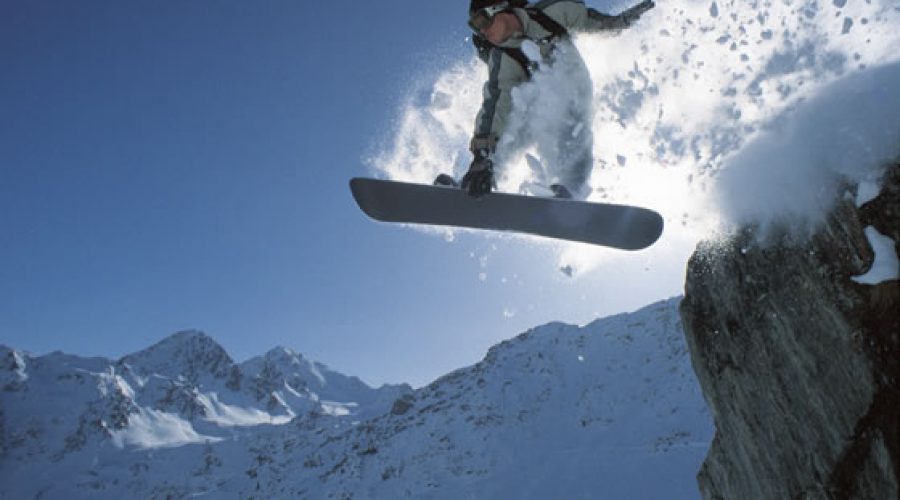 There’s a winter sports revolution going on in Cornwall. After years in the wilderness, Cornwall’s skiers and snowboarders finally have something to cheer about. Adventure Cornwall investigates. For a place without mountains, hardly any snow and no artificial ski slope, Cornwall hardly springs to mind when talking about winter sports. Yet Cornwall does have a natural affinity with the slopes. Borne from the crossover between surfing and snowboarding, the snow sports connection is gaining strength year on year.

Surf and snow lifestyles have grown closer to the point of merging, leading legions of Cornish surfers to ride in the mountains. There are an estimated 30,000 skiers and boarders in Cornwall; not to mention all the winter sports fans who swap the beach for the mountains each year to work the season. Now that Cornwall’s barriers to slope sports are starting to break down, even more people are expected to join the party.

The opening of new air routes direct from Newquay to the Alps has thrown a lifeline to Cornwall’s winter sports enthusiasts. For the first time they can access the slopes without the hassle of travelling out of county. And soon plans will be unveiled for a world class ‘snow’ park in their own backyard. There’s never been a better time to be a skier or snowboarder in Cornwall.

This addiction to snow sports, particularly snowboarding, has been fuelled by Cornwall’s passion for surfing and other board sports like skateboarding and kitesurfing. “Surfing the frozen wave”, was a phrase that was bandied about when snowboarding surged in popularity in the early Nineties. Without wave riding, snowboarding, as we know it, would never have been invented.

Snowboarding was born in California in the 1960s when Sherman Poppen invented The Snurfer by bolting two skis together. Early models were crude but characters like surfer Chuck Barfoot and Tom Sims of Sims Snowboards were soon experimenting with fibreglass prototypes modelled on surfboards. As the equipment improved, surfers naturally gravitated to the mountains to experience the thrill of carving on snow.

Snowboarding finally hit the mainstream in 1989 when resorts started opening their lifts to boarders. Surf clothing manufacturer Ocean Pacific later put on the Op Wintersurf contest, a crossover event where professional surfers and snowboarders competed against each other in both disciplines. Legendary surfer Gary Elkerton won the contest, showing the progression from ocean to mountain followed by countless surfers.

The list of top wave riders who have taken to the slopes is very long indeed. Chief among the big names is man mountain Laird Hamilton who has added snowboarding to the portfolio of board sports he excels at. In Cornwall, we know Alan Stokes and Sam Lamiroy have dabbled. And European Longboard Champion Ben Skinner regularly shreds the white stuff and was consultant on the development of a strapless surf style board known as the Barefoot.

Take to the Hills

Cornwall’s very own James Sweet has, against the odds, carved a career as a professional snowboarder, even though he started out riding waves in Bude. The lessons he learned in the sea and in the skatepark have proved invaluable to his snowboard style. He says, “Good surfers already have great balance and board control, which makes the transition to snow easy. I think surfing teaches smoothness and fluidity, whereas skateboarding gives you precision and the ability to be creative with your surroundings. It’s all about style in the end – if it don’t look good, it ‘aint good.”

James is excited about the prospect of a ‘snow’ park for Cornwall as it will help to tap into this wealth of talent and hopefully produce some future champions. “Cornwall is the only place in England where the surf snow crossover will happen,” he says. “I’d be keen to help develop a Cornish scene with Grom development camps and contests. With quality facilities in the county this could become a reality!”

No one is more excited about Cornwall’s winter sports revolution than Chris O’Connell – the man behind the Winterpark project. He has made it his life’s ambition to bring a world-class ski and snowboard facility to Cornwall. The park includes plans for landscaped slopes at hundreds of metres in length, boarder-cross and free-ski areas and a huge half-pipe.

Now this Winterpark dream is finally starting to turn into a reality. A sufficiently steep site has been identified and multi-million pound funding has been secured. Chris is just waiting for all parties involved to sign on the dotted line before he can spill the beans on the exciting project. “All I can say is that it will be the best artificial ski park in Europe,” says Chris. “It’s not worth doing unless this is going to be the best.”

Although he has looked at sites across the UK, Chris claims Cornwall is the perfect place for his ambitious project. “Cornwall is the only place in the country without a dry ski slope. It’s madness when you think about the pool of talent we have here. Thanks to the popularity of surfing and other balance sports, there are tens thousands of people who would love to ride at Winterpark. Just think of all the flat days when they could be ripping it up on the slopes or getting air out of the pipe!”

With the addition of a ‘snow’ park in Cornwall, Chris believes the sea to snow crossover will be complete. “Surfers are halfway there as surfing is so much harder to learn. With the consistency of a never-changing slope, the learning curve will be much steeper for them. They will be able to learn skills and techniques here, which they can transplant to the mountains. I can see no reason why we can’t produce champions at a European or international level.”

If this is the shape of things to come, then bring on the revolution!

Information
For more information about Winterpark Cornwall visit the official website at www.winterparkcornwall.com