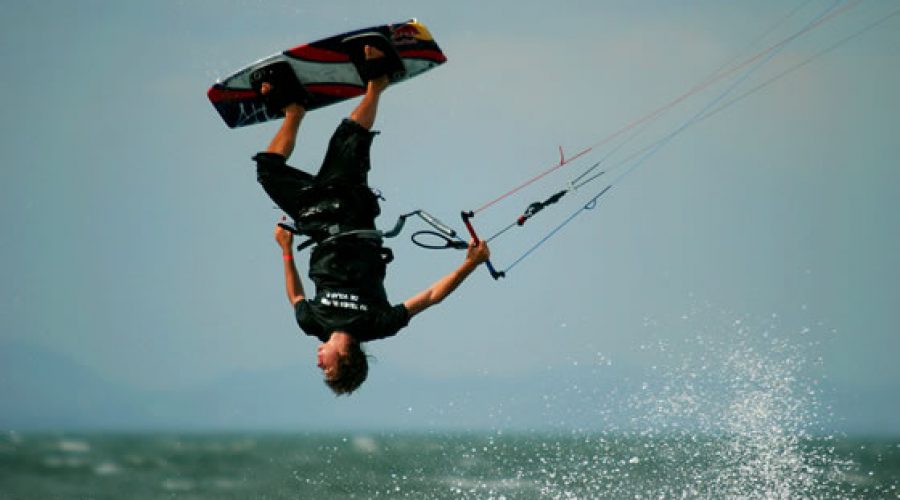 Aaron Hadlow is unstoppable. Since we first spoke to him for this interview, the kitesurfer has won the pro tour in both 2006 and 2007. He is now four times world kitesurf champion. A phenomenal effort for the kitesurfer who grew up in Cornwall. Aaron Hadlow is no ordinary teenager. The kitesurfing superstar was just 15 when he became world champion. He then made history by becoming the first person to win the title for the second consecutive year in 2005. He travels from one stunning destination to the next to train and compete – a dream lifestyle made possible by contest earnings and support from sponsors Flexifoil, RedBull, Chiemsee and ProLimit. Now at just 17 years old, he’s on target to clinch the world championship for an incredible third time. Not bad for a young man who was at school in Cornwall only a few years ago. Aaron takes a break from the pro world tour to chat to Adventure Cornwall.

AC: What was it like to be crowned world champion at the tender age of 15?
AH: It was an amazing feeling. I always dreamed of winning the world title and for it to happen so quickly was just a dream come true.To win a second world title was a phenomenal achievement.

AC: How did that feel?
AH: It was my goal once I had won for the first time. No one had kept the title for two consecutive years so that was what I planned to do. I practiced hard through the winter and came out winning again. That was an incredible feeling and hard to believe.

AC: You’ve had a great start to the 2006 season. Do you think you’ve got the momentum to win a third world title?
AH? Yes, it is possible, without a doubt. Again, I practiced hard but was unsure what to expect at the first event, it all went well and now I feel I can do it for the third time

AC: What is your first memory of kitesurfing?
AH: I always remember flying my dad’s kite on the beach when he came off the water. I would take it and jump and get pulled up and down the beach. Then when I went on holiday to Cabarete I first stepped up on the board, I remember being so happy.

AC: When did you realise you had the potential to go all the way?
AH: Each year I improved really quickly. Then in 2003 my dad asked if I would like to try a world cup event. I finished ninth and that’s when I realised I had a chance to do well in the future.

AC: How do you think growing up in Cornwall contributed to your chosen path in life?
AH: If I wasn’t around the beach I doubt this would have happened. Living in Cornwall was perfect, it picks up all the wind directions, has great beaches and every day coming back from school I could stop at the beach before going home.

AC: You seem unstoppable at the moment. What have you got that others haven’t?
AH: I don’t know really. I have great support from family and sponsors but also I am very driven and competitive and hate losing. I find with Kitesurfing I am able to think up new trick and innovate which also helps.

AC: How do you stay focused for competitions?
AH: When you kitesurf so much, even though it’s great, sometimes it can be hard to stay motivated. I just look at the life I lead compared to the life I could have. That’s enough to keep me going and stay focused to win.

AC: What’s your favourite move and why?
AH: My favourite move is always the latest one I am working on. Learning something new is fun and when you finally nail it for the first time the feeling is really great.

AC: Who are your own kitesurfing heroes and why?
AH: At first I looked up to Lou Wainman as he was so ahead of his time. When I was competing Martin Vari was the man to beat and I also looked up to him as he was so advanced to most people.

AC: What are your thoughts on safety in the sport and the new safer equipment?
AH: The new bow kites have a lot more de-power which is safer and great for the sport. Although they are not what I need from a kite there is defiantly a place in the market for them. I think that all kites are only going to get better and safer. Even the standard C-Kite with 5th line is a great safety feature.

AC: Where do you go from here?
AH: At the moment my main focus is on this year and hopefully getting the Championship for the third time. After that I would like to keep competing but also do some other things like movies and trips to new, different places.

AC: What advice do you have for youngsters starting out on the competition circuit? Or people who’d like to take up kitesurfing?
AH: If you are learning it would be best to find your nearest approved school. That is the quickest and safest way to learn. If you want to start competing first work your way up, start in your national competitions and if you get the chance to make it to a World Cup event, seize it.