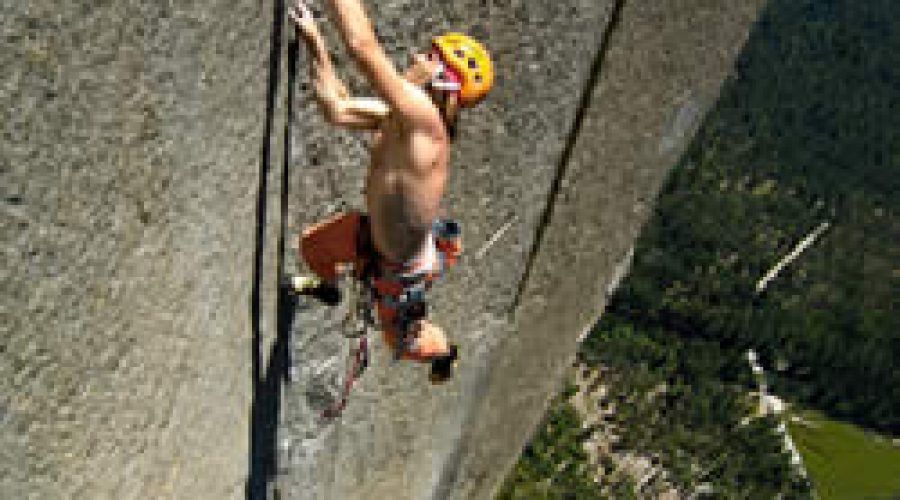 It’s not often that we tell tales of adventures from the other side of the world but this stunning photo made the story impossible to resist.

It shows climbers Alexander and Thomas Huber on the Nose of El Capitan, in Yosemite National Park, California USA, where they set a new speed-climbing record of 2hr 45min 45sec.

It took Warren J Harding, Wayne Merry and George Whitmore 47 days to ascend the 1000m-high face in 1958, but the two German brothers made the best of a warm autumn to break the previous best time of 2hr 48min 50sec set by Hans Florine and Yuji Hirayama in 2006 by over three minutes.

“Thomas and I live for our sport and therefore we wanted to use the chance to climb faster than anybody else on that route,” said Alexander Huber, 38, afterwards.

“The nose is the most famous route in the world and El Capitan is the most important rock face in climbing.” Huber said. “It’s just great to be there and do such crazy things like speed climbing!”

The Bavarian-born brothers have spent four weeks in Yosemite National Park, California, preparing for the attempt and making numerous dummy runs on the face.

“We climbed the route again and again in order to know the moves and tactical tricks as well as to gain the necessary endurance,” said Alexander Huber.

“It’s not only that the climbing is very risky, because we don’t have the time to place lots of protection, but it was also very exhausting. To run up 1000 vertical meters in less than three hours is a tough game.”

Amazingly Alexander and Thomas (40) had already made one successful attempt on October 4, and broke Florine’s and Hirayama’s time by a slim 20 seconds.

“This gave us the motivation to go back and to give it another try,” Huber said, “even though there is always a high risk involved.”

For the two brothers, who were introduced to alpinism by their father, a respected climber in his own right, claiming the record has special significance.

“We started the whole project exactly two years ago,” Alexander explains. “Due to accidents and injuries we failed twice, so it cost a lot of motivation to come back and give it another try.”

“But the more it costs the more memorable it is.”