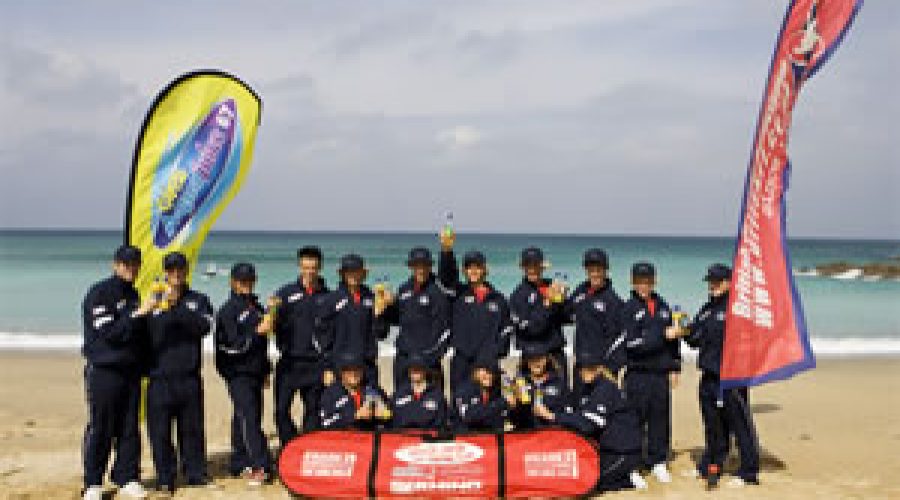 Twelve youngsters from Cornwall, Devon and Wales have been selected by the British Surfing Association for the British Junior Surfing Team for the 2008 Quiksilver ISA World Junior Surfing Championships which take place in France in May.

The event, which is the surfing equivalent of the Olympics, will see the juniors compete at the top level against the world’s best up-and-coming young surfers, including under-18s from the surf ‘power brokers’ such as Australia, USA, South Africa, along side emerging nations including Israel, Morocco, Costa Rica.

Sponsored by Calypso, Brittany Ferries, Rhino board bags and Robie Robes, the British Junior Surf Team will now undergo an intensive training schedule to ensure they are fully fit and prepared for the championships.

They will travel to France with Brittany Ferries where the famous breaks of Seignosse, Hossegor and Capbreton in the South West of France.

Unlike standard professional events, the surfers will compete in national team format. This format is unique in world surfing and the surfers will be competing solely for the honour of receiving a gold, silver, bronze or copper medal and representing their nation.

The twelve selected youngsters have been part of an ongoing youth surf development and training scheme sponsored by Calypso.  Further to this, they have all proven themselves on the annual contest circuit and a number of them have competed in the Junior World and European teams in the past.

They’ll be supported in France by some of the best British coaches and managers who have also been specially selected to represent their country.

In the Under 18s Boys category Lyndon Wake from Croyde will join Lewis Clinton and Arron Evans from Newquay and Stuart Campbell from Woolacombe.

The Under 16s team will see a combination of Wilmslow’s Luis Eyre, Josh Piper and George Picking from Newquay and Toby Donachie from St Merryn.

Head coach Barrie Hall said: “To be selected for the team for the 2008 Quiksilver ISA World Junior Surfing Championships is one of the highlights of these young surfers’ careers thus far and illustrates their talent and dedication to the sport.

“This event is the equivalent of the surfing Olympics and our young British athletes will be pushed to their very max, to drive themselves to the absolute top of their game to represent their nation on this prestigious global platform.

“The ongoing Calypso training and development programme has ensured that we have all been working together as a team for some time now and we’re looking to beat our last results and ensure that we see this British team prove themselves within the global top ten.”

National Director of the British Surfing Association, Karen Walton commented: “With only a couple of weeks to go, the coaches and managers will be working closely with all of the team to ensure that they are physically and psychologically ready for the championships and we’re looking forward to seeing them all in the water, and hopefully on the podium, representing our surfing nation.”