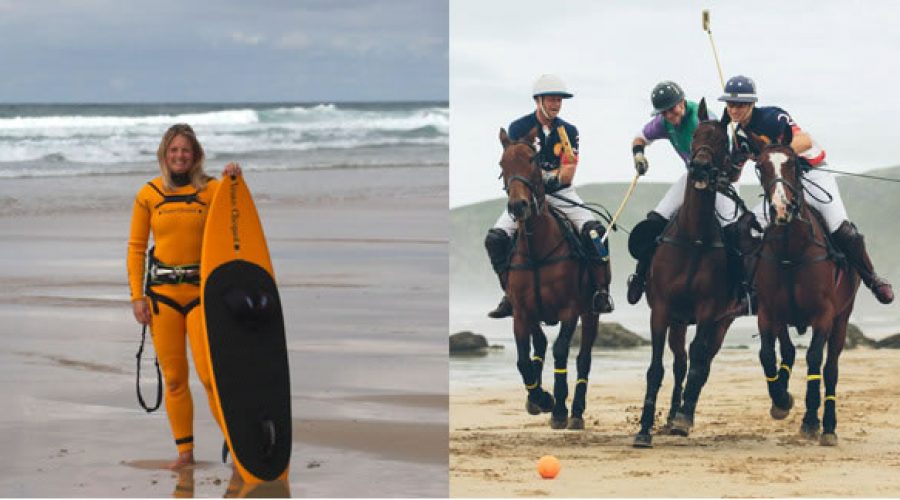 Kite vs Horse at Watergate Bay.

Record breaking kitesurfer, Dreya Bennett is no stranger to tackling new sports, but this weekend you’ll be able to catch her racing alongside a polo pony along Watergate Beach.  Watergate Bay Hotelare promising a spectacular weekend of equine entertainment as the new-format Veuve Clicquot Polo on the Beach returns to north Cornwall on Saturday 18 and Sunday 19 May 2013.

Surf meets turf on Saturday 18 May at 2.30pm when a dramatic “Horse vs Kite Challenge” takes place along a 200 metre shoreline course. Champion Gladiator and Guinness World Record breaking kitesurfer Dreya Bennett will be pitted against Andy Burgess of South West Polo, who will be riding ex-racehorse Shrivar.

After four years as a professional kitesurfer Dreya is no stranger to competition. She said: “Apparently some polo ponies can reach speeds of 40mph. For me it totally depends on the wind strength and direction.

“Perfect conditions would be a 20mph westerly wind and could see me reach 40 knots (46 mph). Ultimately this challenge is all about nature versus nature, so who knows who will win.”

The packed timetable crams in two days of polo matches, family-friendly entertainment and live music. The highlight of the event will be the annual Watergate Bay Trophy polo match at 5.30pm on Sunday. Now in its seventh year, Veuve Clicquot Polo on the Beach is still free for the public to attend.

A Veuve Clicquot Champagne Deck and Beach Hut barbecue and bar will be open throughout the weekend from 12pm to 8pm. Executive chef Neil Haydock’s barbecue menu will feature a classic burger alongside beef rendang and sweet potato curry.

At 3.30pm on Saturday 18 May, spectators will be given an introduction to the rules of polo before cheering on the Cornwall Team as they take on The Rest of the World in the first polo match of the weekend. Live music from singer songwriter Adam Isaac will start at 6pm.

Arthur de Lencquesaing, Brand Manager for Veuve Clicquot UK said: “Veuve Clicquot were delighted to sponsor Dreya in her Guinness World Record crossing from Watergate Bay to Ireland back in 2005. Knowing she still holds that record shows just how determined Dreya is. I think Saturday’s Horse vs Kite Challenge is going to be quite something. For me the pinnacle of the weekend is going to be the annual Watergate Bay Trophy match on Sunday. The teams always put on such a thrilling display and the standard of polo is so high.

“This year our elegant Veuve Clicquot Champagne Deck and bar will be located right next to the pitch. Covered and raised it will be the perfect place to take in the action with a chilled flute of Veuve Clicquot.”

The entertainment continues into Sunday with one of Europe’s leading horsemasters, Gerard Naprous, whose Devil’s Horsemen will perform two afternoon Cossack stunt displays.

The riders possess extreme levels of fitness, gymnastic ability and a genuine taste for danger to perform acrobatic tricks whilst galloping at speed.

At 5.30pm on Sunday, teams from Joules and First Great Western will take to the pitch for the Watergate Bay Trophy match. Last year’s victors Joules only narrowly clinched the title so crowds can expect a special display from some of the UK’s highest ranked polo players.

Joules will be selling special Watergate Bay team polo shirts throughout the weekend. These are the same shirts worn by the professional polo players in the main match.

A trophy presentation at 6.30pm will be followed by live music from AlBenAza on the beach from 7pm as the sun sets.

On Sunday a special House Party will be held on the terraces of Watergate Bay Hotel. Ticket holders will enjoy an afternoon tea of Danish open sandwiches, scones and Champagne cocktails. After soaking up the polo atmosphere on the VIP viewing deck, guests will then head to the hotel’s Living Space at 7pm for a Veuve Clicquot Champagne reception, food and live music.

Tickets for the house party are priced at £110 per person. For more details and to buy tickets please contact Alison on: Alison@watergatebay.co.uk; Tel: 01637 861295.