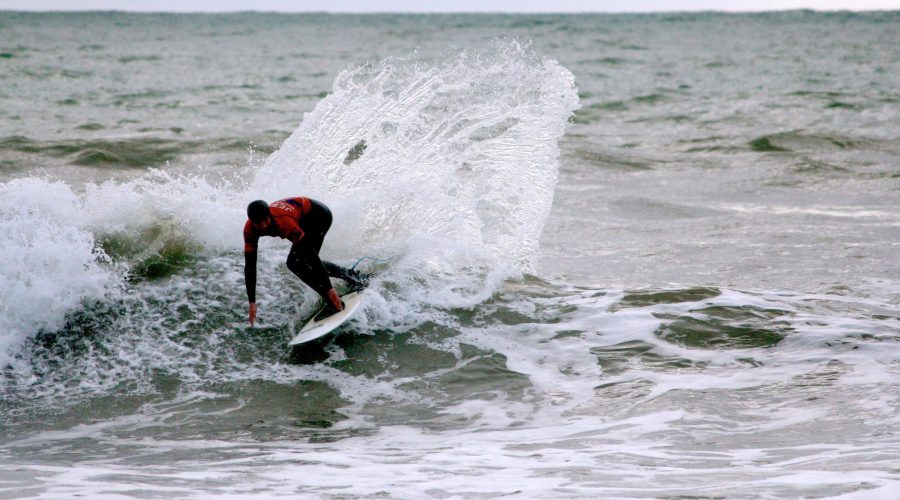 Traditionally the first surf contest of the year takes place in the often forgotten wave hungry communities of South East Cornwall in early January, and for 2013 this was no different with the community-based ‘Ice cube surf classic’ taking place on Saturday 12th of January at Seaton Beach, in some pretty cold and at times, wet weather.

The contest has been running ever since the surf club was formed, and covers the south-east Cornwall area including Liskeard, and is renowned for being an event full of hospitality, camaraderie, and great fun.

Organisers South East Cornwall surf club were supported at this event by Christian Surfers UK, who provide much of the infrastructure, judges and warming refreshments, it’s a great partnership that continues to work well.

Contest director Kevin Smith had put the dates for the event on a four-week waiting period, which is always a challenge particular on the South coast, and he was mightily relieved to see that despite the small conditions on Friday night, the surf picked up for Saturday’s event.

The event combines a couple of traditional events such as the under 12’s, and under 16’s as well as the infamous expression session (anything goes) and the highlight of the event which is the team event. Surfers from the surrounding area’s get into teams, and compete against each other in a series of extended heats.

As far as the surf action goes the ‘under 12’ event was hotly contested with travelling surfer Garin Clay taking the 2013 title for the first time, proving his early start for him and Dad Gary from the North Devon area was well worth it. The remainder of the places were hotly contested by the McSherry brothers, and a big thanks to Dad Pat for pulling them all out of bed to compete on such a cold wet day.

The standard increased in the ‘under 16’ final with local charger Ed Smith once again showing his dominance, and local knowledge of the break, with some great left-handers from the right end of the beach, to take first place, with Robbie Roseveare in second and James Bennett just missing out in third.

With the tide now pushing in again, the Expression session consisted of approximately 15 surfers in a 30 min heat, with the sole aim of impressing judges. It’s fair to say that plenty of action went down, thankfully all of it good-humoured. In second place was local longboarder Will Doyle, who performed a couple of nice turns at the back followed by switch foot and finished off with a great headstand. However that was eclipsed by Jak Smith and Tom Whitley who performed a great tandem ride (starting off on separate boards and Jak then jumping onto Tom’s board to ride into the beach).

The main focus for the day revolved around the team event, and as ever this was hotly contested. It took place through a series of 30 minute heats, and each of the team members were judged, before calculating the overall winners at the end of the fourth heat. The winning team ‘Broseveare’ who’s surfers included Jack and Ed Smith, Mr B, and Robbie Roseveare, managed to win three heats and get the second in the fourth to give them a clear victory. The other places however were more evenly contested with ‘Free dinner at the view’ just pipping ‘Liskeard’ into third place.

Presentations took place in the shelter of the Seaton cafe, to which the organisers would like to say big thanks, and after numerous speeches and a few laughs the surfers jumped back into the ocean. A big thanks also to Doyle and Whitley who designed the trophies which consisted of Cornish oak, and looked great. One of the best quotes of the day was in the expression session by one of the local surfers who said ‘I have never had so much fun in such crowded conditions’, and I think that sums up the community spirit of this event.

Celebrations then moved on to the Inn on the Shore in the evening when many tales were told of previous waves surfed and the usual surf banter. The South East Cornwall Surf club would like to thank all those who took part in the event, and all those who supported it particularly Christian Surfers UK, Xcel wetsuits, Skinners Brewery, Ocean and Earth, Daniel Surf, Stance Socks, Dragon eyewear, James and the RNLI, Skinners Brewery, and the volunteers on the day.