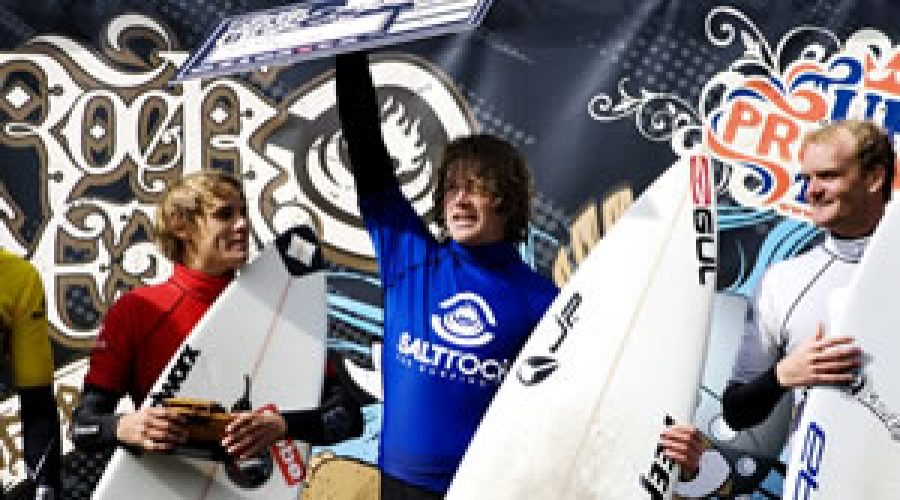 Newquay surfer Mark Harris clinched the first title of the UK Pro Surf Tour with a masterclass of inspired surfing in testing conditions at Croyde Bay in April.

Mark snatched the Saltrock Open title from under the noses of fellow finalists Matt Capel (South Devon), Joss Ash (Bude) and Johnny Fryer (Isle of Wight) in a gripping battle full of drama and technical brilliance.

Entries were bulging in each of the six divisions, and large numbers of spectators lined the contest arena to see things get underway bright and early on a sunny Saturday morning in some decent 3 to 4 foot swell.

Winds were still gusting strongly, having dropped considerably overnight, and competitors in the first rounds were tested thoroughly by the challenging conditions.

First off the blocks were the Pro-Juniors, who paddled out eagerly into the powerful surf.  Tom Butler (Newquay) and Reubyn Ash (Bude) stood out early on, surfing skilfully and confidently through the rounds to compete in an action packed final where a deserving Reubyn Ash was eventually crowned Pro Junior champion.

The Groms had to battle similarly tricky conditions and it was a real test of the young surfers’ water knowledge to find a path through the surging white water. The final saw a showdown between stars of the future Toby Donachie (St Merryn) and Josh Piper (Newquay), with a triumphant Toby Donachie finally clinching the win.

A strong women’s field also took to the water on Saturday and there were some excellent displays of power and technical skill. But it was the consistently good Nicole Morgan (Ireland) who took the title, beating Sarah Bentley (St Agnes) to the post in a tense final on the Sunday.

Sunday saw the majority of the battle for the Men’s Open take place in slightly smaller but cleaner waves.

The usual suspects were out in force. Last years Saltrock Open winner Sam Lamiroy (Newcastle) advanced confidently through the heats until the semi final where he lost out in tricky conditions.

Alan Stokes (Newquay) surfed well all weekend but was judged to have interfered with Johnny Fryer’s wave in the next semi which effectively ended his challenge for the title.

Fryer joined Matt Capel and Joss Ash who pulled an outstanding air reverse to secure his place in the final. But none were match for British champ Mark ‘Egor’ Harris who ended the weekend with a convincing win.

Ross Thomson of Saltrock commented: “We saw some great performances this weekend and although the swell dropped off on Sunday afternoon it was a good weekend of surf.”

The Relentless Money Move for the best Aerial of the event went to Reubyn Ash (Bude) who preformed an air reverse in his Pro Junior semi final heat.

* For surf schools and surfing lessons see our surfing in Cornwall page.