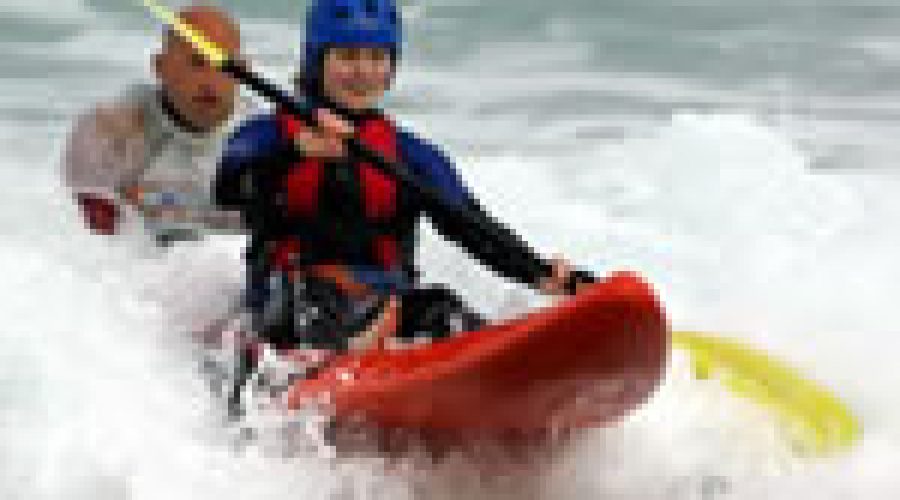 As challenges go, this one seemed particularly madcap. The goal: to participate in as many extreme sports and activities as possible in one day. Luckily we live in one of the most adventure-rich corners of the country, so we didn’t have to stray far to start notching up the adrenalin-filled experiences. Here’s how the day panned out.

The most extreme my life gets at the moment is deciding which baguette filling to have. My hands are set rigidly in a typing stance and I’ve forgotten what it’s like to feel exhilarated or terrified. Gazing out of the window I realise I’m in dire need of an adrenaline fix, but a normal one won’t cut it this time.

And so the concept arrived. How many extreme activities can you fit into one day? This is no small feat to attempt – there’s transport, equipment, instructors, safety and an itinerary to orchestrate. An immaculate knowledge of the area and its extreme potential is vital so I call on group travel and holiday specialists Explore South West for assistance. Co-founder Andi Milson thus becomes mastermind, companion, guide, transport and general coaxer from great heights. 0800hrs. I’m standing wetsuit clad, bathed in weak light and sea spray at Watergate Bay. Facing an intense 12 hours, things start peacefully with gentle giant Carl Coombes taking me through some stretches before we wade into the water for a waveski lesson. Armed with a paddle, helmet and buoyancy aid, the former world champion guides me into the lightly breaking surf and watches as I persistently capsize. After four waves and some patient instruction I relax, lean back and use the paddle to steady the ski and glide into shore. Magic.

0830hrs. Awake and enthused now, surf coach Chris Thomson tries to correct the bad habits I’ve picked up since first trying the sport last year. Basically I’m a shambles, bum sticking out, arms flapping ineffectually and frequently focusing on my feet until I topple clumsily over. Within a short space of time he’s convinced me there are laser beams running upwards from the rails and if I cross them something horrible will happen. After great exertion on both our parts I stop staring downwards and hold my head high. This is going well. 1000hrs. Coasteering instructor Dave Spurrel and I plunge into a forbiddingly dark sea near Newquay’s Little Fistral. “It always feels much colder than you expect at first,” he explains. He isn’t joking. We clamber crab-like above the breaking waves, until we’re standing on a natural platform 15ft above what looks like a very black, choppy and rock-infested surface. Dave does a test jump, then I step off and plummet feet first into the depths. The sensation of bursting back up and seeing where you’ve come from makes the sheer terror well worth it. Next we’re being bumped around as a female seal comes to play, demonstrating how easy this habitat can be if you’re designed for it.

1130hrs. Getting tired now, it’s time to swap the water for the heights, which is bad news due to my irrational fear of anything taller than a step ladder. Dave is still in charge for the next five activities and proceeds to strap me on to the zip wire and fling me out over Lusty Glaze Beach. I swoop high above children playing volleyball, feeling exposed but privileged to have such a view of one of Newquay’s most striking beaches. 145hrs. Next comes Snakes and Ladders – an assault course that climbs steeply up the cliff involving nets, tyres and other obstacles. When I’m nearing the top of the slope I lose my footing and slip back to where I just struggled up from. Momentarily I feel desperately vulnerable and hopeless. Retracing the steps more carefully is a lesson in perseverance and it’s gratifying when I finally surface at the top.

1200hrs. The most challenging ventures can sometimes be the ones you foolishly disregard, and so it was with the Rat Run. Used to train paramedics for difficult rescues, it consists of a series of tight, dark, sandy tunnels which twist and turn, making you disorientated and frantic. Not for the claustrophobic individual, I make for a pretty pathetic sight when I emerge blinking and grubby into the sunshine. 1230hrs. In sharp contrast I’m soon exposed to the elements on the Postman’s Walk, consisting of three precarious ropes suspended above the cliffs. For some reason this activity completely outwits me – the ropes are loose and bouncy, my arms noticeably inadequate in length. Gingerly inching along, I fall off after a few feet and hang like a despondent tea bag until Dave reels me in.

1300hrs. Abseiling, which I’ve been dreading, turns out to be not so bad. The initial few steps, where comfortable solid ground moves from below to alongside, are the worst and I’m shaking too much to let out the rope. Eventually it is Andi and Dave’s good natured heckling that spurs me on and soon I’m at the bottom of the cliff – a little pale and queasy but buzzing none the less. 1400hrs. A steak and stilton baguette later and we arrive at Skypark for some power kiting. I’ve no expectations of this activity but am amazed by how uplifting and stylish it is. The kite plunges and soars with my every move, dragging my heels through the buttercups in the specially-designed field. Skyhooked founder Dom Moore gives me a succinct but thorough kite lesson. Then before long I’m strapped to a board and bumping merrily along in the breeze. I could easily spend a whole day on this activity and know I’ll be back for more kiting soon.

1530hrs. We’ve travelled to Scorrier to meet up with Tim Ovens of Mobius for some Mountain Biking. Wrong to think this would be a pedal in the park, we race through steep quarry pits and deep woodland trails on state-of-the-art bikes. My thighs are screaming by this stage and I’m aware I look like some kind of Cornish inspired she-troll, but there’s no escape from Andi’s meticulous itinerary. The day marches on. 1700hrs. High powered fun next at the ATV Centre near Blackwater, where Andi and I hurtle around a bumpy circuit on quad bikes. They’re fast and easy to operate – an instant adrenalin fix and a rest from frightening heights and muscle-punishing endeavours. I’m wary of their power and look like I’m operating a mobility scooter compared to Andi who charges round making dust and gaining airs.

1830hrs. My penultimate activity is without doubt the most unusual. Deep in woods near St Columb Major we find Alan of the Mighty Oak Climbing Company standing at the foot of a giant, thick-trunked tree which I am about to climb. It takes an initial effort to master the slightly confusing system of knots but soon I’m hoisting myself up into the dense foliage. Beautiful Cornish fields reveal themselves as I climb higher and I feel overwhelmingly content as I rest on one of the tree’s broad boughs. 2000hrs. And so it ends where it began, back in Watergate Bay, for a spot of Mountain Boarding. My strength and concentration begin to fail but instructor Rachel patiently teaches me simple turns and how to stop stylishly without the use of my backside. The thing I love about this activity is its diversity – take the board to the beach, the road or the mountains, use it on its own or attach it to a kite. It’s the perfect end to an unbelievable day as the sun sinks behind the hill.

A pint in the Phoenix rounds everything off. Thirteen intense and varied activities later, we’ve covered many miles but only scratched the surface. What becomes clear is how easy it would be to notch up more activities if only we could prolong the daylight. Everything I’ve tried during a long and exhausting 12 hours deserves more time and depth than this mapcap adventure allows. I’m absolutely positive that nowhere except Cornwall could offer this amazing blend of extreme adventure pastimes, breathtaking settings and buzzing atmosphere. I’ve never had a day like it; never been so thrilled, terrified or triumphant. I can’t go back to my baguette lifestyle now. It’s gone too far.