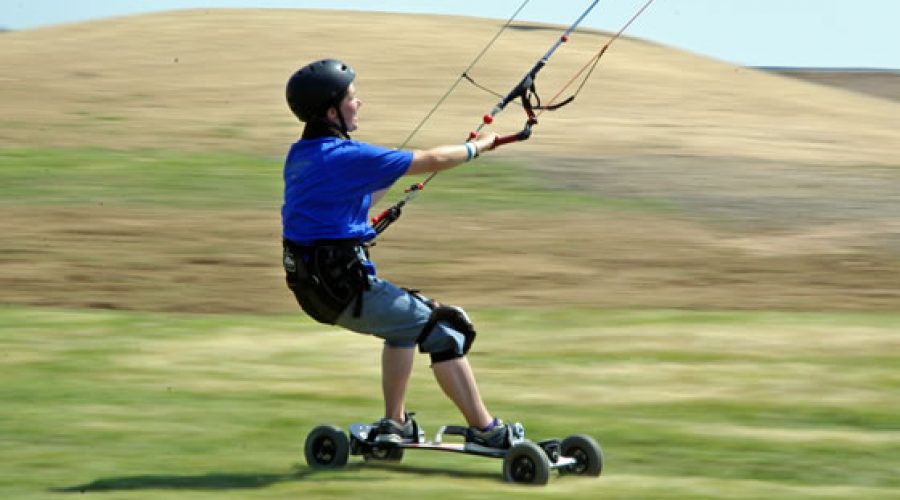 Windswept Cornwall is a Mecca for kite flying of all kinds. But at certain locations it’s land kiteboarding that has really taken off. Our kiting expert divulges some of the county’s kiteboarding hotspots. Cornwall is the only county in the UK that has an ocean border on three sides. Wind is seldom in short supply but finding a safe and suitable place to fly a kite can be a chore. With a little planning and understanding of local conditions, you should be able to bag a classic session on a breezy autumn day.

The large tidal range is what gives Cornwall its wide, expansive sandy beaches. A common sense rule of no kiting two hours either side of high tide must be obeyed at all locations – flouting this will see you get cut off by the tide, caught in an updraft, dragged into the cliffs or otherwise in danger on a rapidly narrowing beach.

The North Coast beaches can offer varying sand states ranging from luscious hard packed billiard table smoothness through to a pothole ridden nightmare. Contrary to belief, it is the huge pounding waves that flatten out the beach, so time your visits to the beach with a booming swell and you’ll score smooth golden sand every time.

Watergate Bay
This large expanse of sand is exposed to all westerly winds. Watch out for rocks, dog walkers and a myriad of other beach users and you could be rewarded with an unparalleled kiting experience. Watergate suffers from the pothole effect more than the other beaches, but when the sands flatten after a big swell, it can be incredible. The wind seems to blow best in the area in front of the main beach complex, while the winds at the southern end of the beach are somewhat dampened by the huge vaulting cliffs.

On all but the quietest days, Watergate can be too busy for all out speed runs, but the smooth steady winds and easy access make it a great place for honing freestyle skills. Watergate boasts fantastic access thanks to its overlooking car park. You’re allowed 15mins free parking, giving you just enough time to check the conditions before you commit to your session.

Crantock
The golden sands of Crantock beach offer kite landboarders an incredible experience although conditions can be fickle. Crantock faces NW out into the Atlantic and, although it has a narrow wind exposure for winds coming in off the sea, it is one of the few beaches on the North Coast that receives smooth winds when it is blowing offshore. This is thanks to the Gannel valley, which funnels the breeze from the land onto the beach. A spring low tide reveals a marble flat sand bar that just begs to be carved up with a set of wheels. With your back to the offshore wind, you’ll be treated to the uncommon site of your kite hovering above the ocean.

Access to the beach is via the village car park. Walk over the dunes, and proceed down the beach towards the sea and the hard packed sand. Crantock doesn’t hold a huge amount of riders and kites are a rare site here so extra consideration must be paid to other beach users at all times.

Penhale
A bit of a hub for kiteboarders, buggyers and speedsailors, this two-mile stretch of beach is awesome on a windy day, allowing for long thigh-burning runs across the sands. It’s possible to kite so far on a reach that you loose site of your start point as it becomes obscured in the sea haze. During a light southerly wind, the huge dunes behind the beach can create a Venturi effect that accelerates the gentle breeze to kiteable speeds. But Penhale really comes alive with a strong onshore wind – the acres of space allowing for some of the best kiting to be found in the UK.

Most kiters prefer to access the beach via the Haven Holiday Park which has a car park at the top of the huge dunes near to the southern end of the beach. Under no circumstances be tempted to kite on the adjacent Perranporth beach which has a full time restriction on power kiting.

Owing to its vast open and slightly isolated situation, Penhale is somewhat free from the usual obstacles that present danger to kiters. The undeniable hazard of kiting here, though, is access should an emergency arise. The solution is to let someone at home know where you are going, and what time you intend to return. If you are unsure of the conditions, and the beach is deserted, it may be prudent to seek out a more populous location.

Gwithian
Located in the wide sweep of St Ives Bay, the stunning vista of Gwithian beach greets you with a siren call as you pull into the windy cliff top car park. Taking its name from the ancient Cornish princess Gwythyan, this fickle mistress will captivate and demoralize in equal measure. In places, the sand is packed like a clay tennis court, only to suddenly turn to swamp in others, catapulting the unwary rider over the front of their board. Wind exposure at Gwithian is fairly open – SW to NW being the best directions to explore the long crescent of sand.

The best area to kite is at the base of the cliffs in front of the main car park. Access to the beach is via the stone steps off to the right of the car park, or a slippery cliff path in front that should only be attempted by the most sure footed Chamoix. Dangers at Gwithian (aside from the patchy sand) arise from the rocks belts that pepper the beach in places. An incoming tide could also catch out the unwary.

Whitsand Bay
Located on the jutting land spit that leads towards Torpoint, Whitsand Bay is the last stop for kiters before leaving Cornwall. Whitsand is rare for a South Coast beach in that it reveals flat, rideable sand at low tide, instead of the usual shelving drop off found on this stretch of coast. Onshores from the SW are undoubtedly the best option as even though the beach is long, it isn’t very wide so cross shore runs in southerlies can be short.

Access is via one of many switchback paths that run down the cliffs – the best one is in the Freathy area. Parking is provided at a grass hilltop car park or on the numerous lay-bys on the ocean side of the road.

Once on the beach, conduct a thorough site assessment for rocks and other beach users, and beware of getting cut off by an incoming tide. The Whitsand Bay area is used from time to time as an MOD firing range so DO NOT ACCESS when the red flag is flying. As with any remote beach, be sure to let someone at home know where you are going and what time you intend to return.

Skypark
This purpose built, inland venue is thought to be the only kite boarder cross park in the world. The park features acres of flat grass for learning and all kinds of jumps, humps and mounds for the more experienced riders, which means the Skypark is often used as a training and proving ground for the sport’s brightest stars. Riding over terrain adds a new dimension to kite landboarding, using the power of a kite to scale a slope is something every rider must try at least once.

With its elevated position – 70m above sea level – the Skypark is kiteable in any wind direction, and the breeze is invariably a few knots stronger up there than on the beach. On the lightest days, this area sometimes benefits from a strange thermal effect that can see NW winds pushing 15knots while the surrounding beaches area barely usable.

As the Skypark is inland, it is unaffected by many of the hazards found on public beaches. However, the Skypark is not the place for breaking the kite landboard speed record, but shines as a venue for exploring the freestyle potential of the sport.

Information
Dom Moore runs kite school Skyhooked (07956 061823; www.skyhooked.net ) which operates out of the Skypark at Monkey Tree Holiday Park in Zelah. Dom teaches beginner, improver and advanced lessons and can organise freeride sessions at the park.