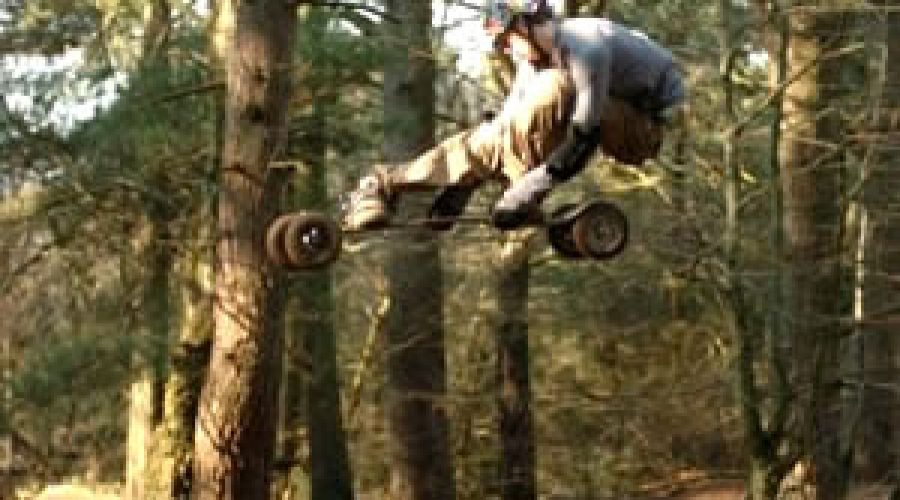 Mountain Board Hero Shares His Secrets

Riders from Cornwall continue to dominate the global mountain boarding scene. At the top of the pile is Tom Kirkman who has won so many world titles we’ve lost count. Here, the Callington hero shares his thoughts on why Cornwall produces the best boarders on the planet. Mountain boarding, also known as all terrain boarding or off road skateboarding is one of the world’s fastest growing sports but still small enough to be super friendly and have a great sense of community. Mountain boarding takes aspects of so many different sports; skateboarding, mountain biking, BMXing, surfing, snowboarding and rolls them into one to create one of the most diverse and adaptable sports out there.

The sport originated in America about 16 years ago when a group of snowboarders wanted something to ride in the summer. Mountain boarding now spans the globe with one of the largest scenes being right here in England. Over the last five years or so England has become a mountain boarding mecca for riders from all over the world looking for the best tracks, jumps and freeride with Cornwall being at the top of their list due to its abundance of grassy hills, gentle woodland, undulating moor land, top centres and also being home to some of the world’s top riders. The diversity of the Cornish landscape means there is something for everyone; for us the super fast woodland runs and big jumps but if you’re a beginner looking to have a go, the ATB centres can provide you with all the equipment and tuition you’ll need to have a great day out. Then, who knows, you might get hooked, buy a board; then there are hundreds of acres of gentle moor land slopes with its short grass and beautiful views to explore. Although newcomers should remember to always wear protective equipment and respect the land and the people you share it with. I started to ride when I was 15 and entered my first comp about a month later.  I then got hooked up with a board company and that was the beginning of my life as it is now. Over the last seven years I have travelled the world to compete and do demos. I’ve been lucky enough to go to some of the most exciting and beautiful places. To name just a few I’ve been to Russia, Brazil, New Zealand, Cyprus, the list goes on and on. In all these places I have met and become great friends with some of the friendliest, coolest people and ridden some of the best tracks and jumps there.

However I still think England has the best riding, for instance, Bugs Boarding in Gloucester, the home of the world freestyle champs has the world’s biggest and best freestyle course along with a huge, perfect beginners slope. The Edge in Shropshire has the one of the longest smoothest boarderX tracks, while Ivy leaf in Cornwall has a bit of everything and a foam pit for practicing your tricks in.

It’s not just the centres, as we have the Malvern hills which have some great free ride as does Dartmoor, Exmoor and Bodmin Moor. Mountain boarding is a great way to get out there and explore; you’ll find that there’s somewhere to ride around almost every corner. Oh yeah, I shouldn’t forget my own park in my backyard in Cornwall, one of the best places to ride, covered in jumps and rails and nestled in the middle of the woods. It’s a shame you won’t be able to find it!

Tom Kirkman is a mountain boarding professional based in Callington, Cornwall. He also runs the website www.atcproductions.co.uk which is a blog, shop and community for all-terrain boarding in the UK.