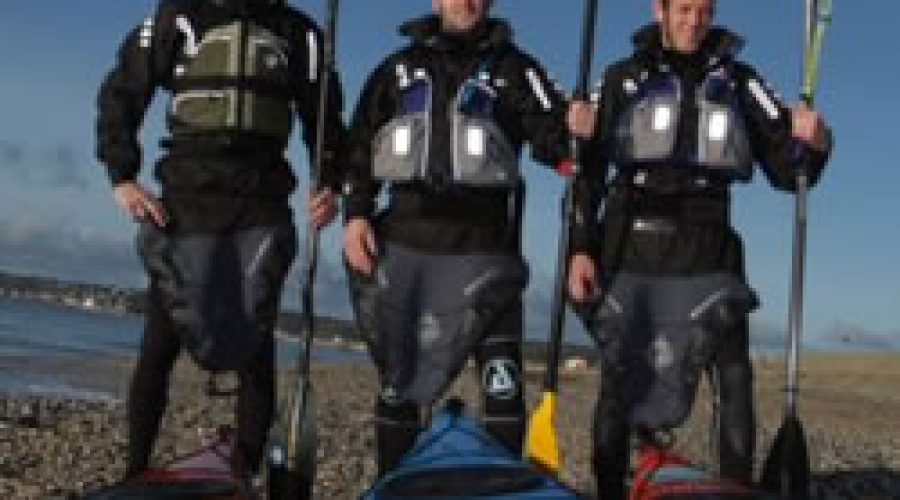 Cornishmen take the Wet Way Round You’ve heard of the Long Way Round, well we now have three Cornish men undertaking the Wet Way Round.  They will be picking up their paddles and kayaking 300 miles around the Cornish Peninsula for three charities.

Kyle Abrahams, Paul Beckinsale and Darren Pascoe will set off on May 1st 2010 and plan to complete the journey around the rugged Cornish coastline in 14 days, paddling by day and camping under the stars at night. They aim to raise £30,000 for their chosen charities Shelterbox, the RNLI and Help For Heroes.

The Wet Way Round team have been training hard all winter, even braving the seas during the snow and ice of earlier this year. Their training program consists of long paddles in the kayaks every weekend, training in the gym 3 times a week, undergoing survival skills training, courses on using equipment such as VHF radios and sticking to specially designed diets.

Paul Beckinsale said “As an ex-service man I’ve seen colleagues who have been badly hurt whilst in service in the forces, and some haven’t made it home at all. Paddling a kayak around Cornwall gives me the chance to raise the profile of Help For Heroes. I’ve been to the main rehabilitation centre for the forces at Headley Court in Surrey and met some of the men and women who work extremely hard to help get our guys and girls back on the road to recovery. We all too often hear of the sacrifices that our soldiers make but we don’t often hear about how we can help support our seriously wounded in rehabilitation. By undertaking this challenge I aim to change this.”

The gruelling 300 miles route will start on the North Coast of Cornwall near Hartland Point and finish underneath the Tamar Bridge at Saltash. They will face many dangers such as large waves, shipping, strong winds and hypothermia. Kyle Abrahams comments “I am most anxious about the section covering the Land’s End peninsula as it is a notoriously treacherous piece of water.”

The team have several fundraising events planned: on 4th April they will be taking part in the Siblyback Lake Open Day where you can meet the team and see them in action. On 11th April they are holding a collection day at Sainsbury’s in Truro where they will all be there to chat to people about their challenge and show all the kit that will make the trip possible and on 23rd April they will be holding a charity auction night at Tricky’s Bar & Restaurant near Redruth with some fantastic items up for grabs.

To find out more about The Wet Way Round, see pictures and videos of the three in training or to donate to the Wet Way Round Fund please visit www.thewetwayround.org