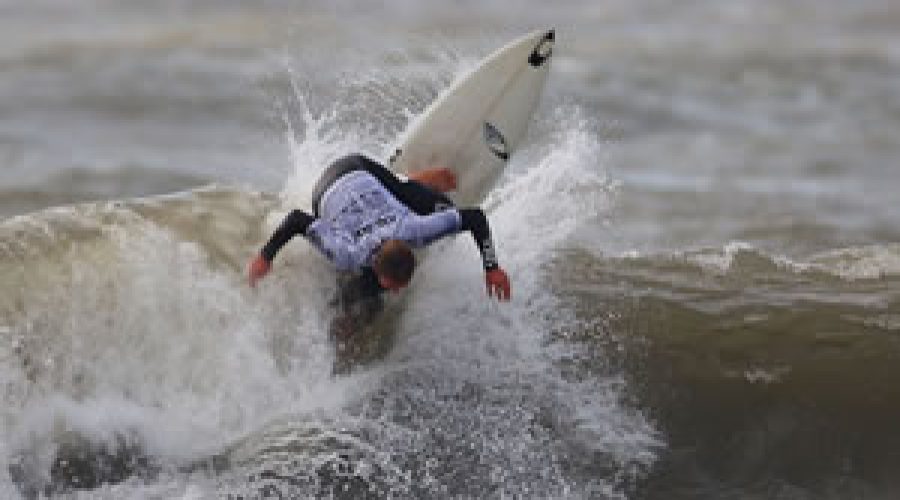 On the 1st of November Oli Adams won his first UK Pro Surf Tour event, the AXL / DOH Pro at Rest Bay Porthcawl. Former British and New Zealand Junior champion excelled in the surf conditions to take the title of the biggest surf event in Wales.
Oli commented “People do not understand how much this means to me, I have been suffering from an illness over the last few years and am now getting back to full fitness. To beat Johnny, Russ and Egor in the final is a fantastic feeling”
Second place went to English Champion Johnny Fryer (Isle of White), whose vertical backhand attack managed to outpoint the rest of the field. Third went to wave-shy Russell Winter (Newquay) and fourth to Mark ‘Egor’ Harris who has now reached the final of the last four UK Pro Surf Tour events.
In the Under 16 Boys division Leon Mansfield (Newquay) showed his class by winning his second UK Pro Surf Tour event in a row consolidating his position at the top of the rankings. Second place went to Zack Lawton (Croyde), his best result on the Grommet tour. A remarkable third went to Under 12 surfer Max Payne (Wadebridge) and coming fourth local surfer Max Tucker.
Dave Reed Tour Director said “The ninth Welsh UK Pro Surf Tour event, the AXL / DOH Pro was blessed with good waves showing the quality of the surf in this region. Thanks to the support of the sponsors AXL Distribution and Double Overhead at short notice, the event has been one of the best we have seen in Wales. With 12 months to plan for next year and the support of the sponsors I am sure it will be even better”.
Winning the Relentless Money Move for the Best Cut-back was Matt Capel (S Devon), who took home £250. The King of Watersports highest scoring wave went to Oli Adams who achieved the best wave of the contest in his semi-final heat.
Many thanks go to all the sponsors including: Billabong, Santa Cruz, Sanuk, The Realm and Carve Eyeware.
The tour now moves onto the last stop Newquay in two weeks time where five surfers are challenging to win the title lead by Bude surfer Reubyn Ash.