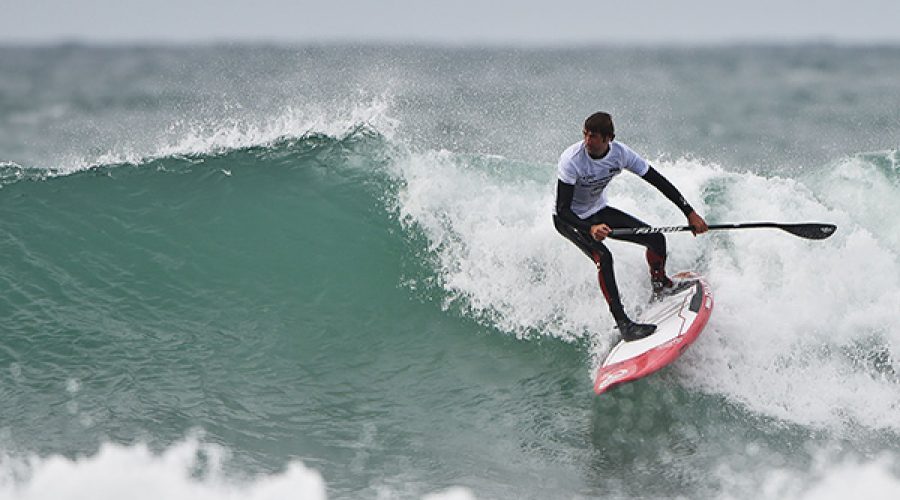 Paddles Ready for the Great British SUP Off

This weekend sees the cream of the country’s top stand up paddle boarders in action at Watergate Bay for the British Championships.

Solid waves are forecast for the British Stand Up Paddleboard Association (BSUPA) National Surf SUP Championships, which is now in its seventh year.

Held at the North Cornwall beach since 2009, the event is well-established as the country’s leading stand up paddleboarding (SUP) wave-riding contest. Finalists in both the open men’s and open women’s competitions will be eligible for selection to represent Team GB in the 2016 ISA Stand Up Paddleboard World Championships.

Described as a cross between canoeing and surfing, SUP is one of the fastest-growing watersports in the UK and worldwide. Riders stand up on a large surfboard and use a single bladed paddle to steer, turn and propel themselves through the water and onto waves.

Carl Coombes, general manager of the Extreme Academy says: “Watergate Bay is known for its consistent surfing conditions all year round, and with waves that work at every stage of the tide we have a proven venue for high calibre events such as the BSUPA National Surf SUP Championships and English National Surfing Championships.

“The BSUPA contest is a fantastic opportunity to watch some of the best British stand up paddleboarders compete. The sport is becoming increasingly popular and we are seeing more people interested in trying the sport at the Extreme Academy.”

Over the course of the two days of the competition there will be three main events: the Open Men, Open Women and Junior Under 16s. The winners of the men’s and women’s competitions will also be crowned Watergate Bay Waterman and Waterwoman.

BSUPA competition organiser Richard Marsh says: “This year’s event will be especially exciting as both current Open Men’s and Open Women’s champions, Matt Barker-Smith and Holly Bassett, are not only looking to defend their titles but are both also going for their third consecutive win.”

17-year-old Holly Bassett, from West Wittering in Sussex, recently took part in the ISA world championships where she ended the event ranked 16th in the world. The A-level student first won the British title at Watergate Bay two years ago at the age of 15.