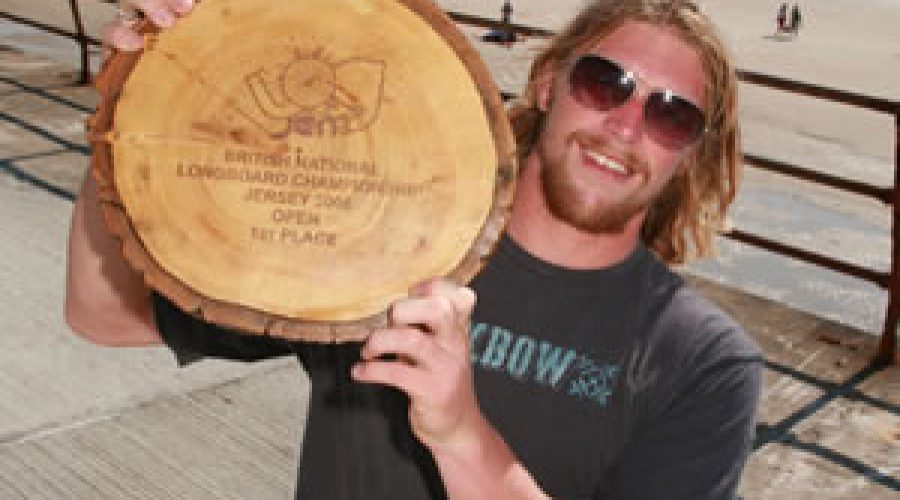 Ben Skinner triumphed again in a continued streak of invincibility at the British National Longboarding Championships in Jersey at the end of July.

It is the fifth British title for the Newquay surfer who grew up on Jersey. He showed his class against over 100 longboarders from across the country who congregated on the island during the Log Jam longboard and music festival.

The weekend threw up a mixed bag of conditions with small onshore waves for the Friday and Saturday followed by clean 3ft waves and a stunning temperature high of 28 degrees on the Sunday.

Very few were surprised to see the Open Men’s final feature Sam Bleakley, Elliot Dudley, Ben Skinner and James Parry. In a characterful performance, Ben showed just why he’s been taking medals and contest titles all over the world with some skillful waves that earned him the overall victory.

In the Seniors, a battle between Sam Bleakley, Andre Le Geyt, Ben Chapman, Vik Danks and Russell White ensued with Sam Bleakley emerging as the winner.  The Masters saw Jersey’s Andre Le Geyt, Peter Journeaux and Paul Gautron and Eric Davies from Bournemouth fighting for the title and Andre Le Geyt taking first place.  In the Veterans, Eric Davies emerged as the winner, after he faced Jeremy Oxenden from Jersey, Minnow Green from St Agnes, Garry Rogers from Cleveland and Vik Danks from Newquay in the final heat.

The BSA worked closely alongside The Jersey Longboard Riders Association to run this three day fun filled event, which was located on the West Coast of Jersey, an ideal longboard surfing spot.  Nearby St Ouens offered a welcome contrast to the hustle of Newquay and throughout the Log Jam, the five miles of golden sand, great surf and the laid-back Watersplash nightclub offered plenty of additional entertainment.

Gordon Blake from The Jersey Longboard Riders Association said, “Without a doubt The British National Longboard Championships 2008 UK stop was a brilliant success and the immense longboarding talent that we have here was more than adequately showcased. The atmosphere and support in the finals was superb and we’re really pleased with how it all went.  We’re definitely keen to see the longboarders all back here next year.”

Karen Walton, National Director of the BSA, says, “This weekend’s British National Longboard Championships saw a refreshing change this weekend, allowing the keen Jersey longboarders the opportunity to showcase their home break. The event went really well and we join everyone in congratulating Ben Skinner on another major British victory.”

* For information on surfing lessons and surf schools in Cornwall, see the Surfing page .