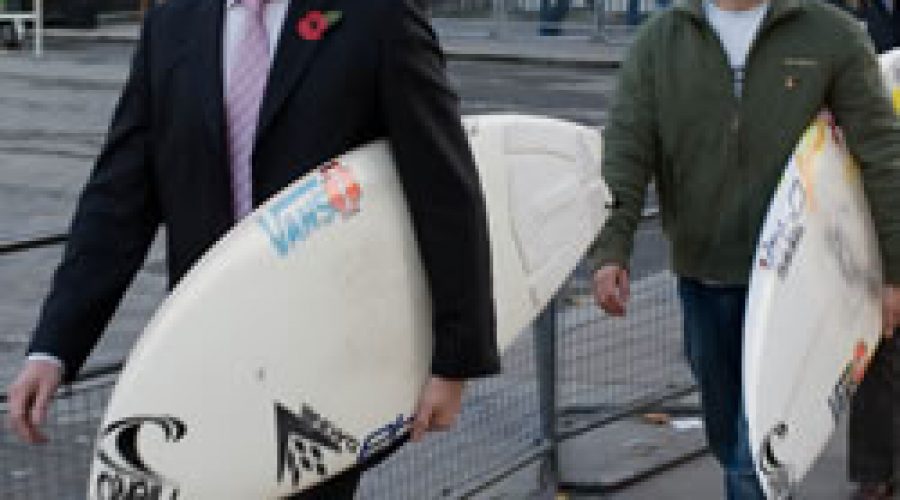 Surfers opposed to British Airways’ new ban on surfboards and other sporting have taken their campaign to the airline’s HQ and the Houses of Parliament to put pressure on the national carrier to reverse its decision.

From 06 November onwards passengers can no longer check-in large sporting items such as surfboards, hang gliders, windsurf boards and sails or kayaks and canoes on BA flights, even though the airline will continue to carry skis, snowboards, cycles, diving equipment and even guns, amongst other items.

On the day of the ban the British Surfing Association’s Acting Chairman Duncan Scott and National Director Karen Walton personally delivered a global petition to BA’s headquarters near Heathrow Airport.

Over 8,000 people from all corners of the globe, including world surf champ Mick Fanning, signed up to the online petition in less than a week and a half. An additional Facebook group ‘British Airways Surfboard Ban’, started by volunteers, has now amassed over 10,000 members. The BSA has also been joined in the campaign by the Royal Yachting Association (RYA) and British Canoe Union (BCU).

After they dropped off the petition at BA’s HQ, they took their campaign to Parliament where they met up with David Davies MP. As a keen surfer the MP agrees that, as an island, our national airline should be enthusiastic about encouraging and supporting these valuable and ever growing lifestyle sports. The MP has laid down an Early Day Motion (EDM) to call on BA to urgently reconsider the ban.

Although collectively the BSA, RYA and BCU organisations represent tens of thousands of members and the petitions and support groups have gathered major global support in an extremely short time period, the BSA’s request for a meeting with BA’s CEO Willie Walsh to discuss the ban has not yet been met.

A whole host of other airlines have come out in support of the campaign. BA’s rival Virgin Atlantic announced that passengers can still take one piece of sporting equipment in addition to their checked baggage allowance. As long as it complies with size and weight allowances, it will be carried free of charge.

Paul Dickinson, Sales and Marketing Director for Virgin Atlantic, said: “Virgin Atlantic continues to be the airline for sports enthusiasts unlike others who are doing everything they can to prevent the gold medalists of the future transporting their equipment.”

A South African Airways spokeswoman commented: "There won't be any decision to follow in BA's footsteps. For us, every passenger is essential. We would never take a standpoint to alienate such a large population of our travellers.”

Air Southwest, which operates to and from Newquay, has stated it is ‘quite happy to carry boards for a modest fixed fee because we know that South West England has some of the best surfing beaches in the UK.’  bmi said it would carry surfboards and water equipment on their flights to Jersey and on onwards travel within their membership of the Star Alliance.

A is sticking to its decision even though they stand to lose a lot of regular business. Until now the British Surfing Team and most of the world’s top surfers, windsurfers and canoeists have regularly chosen BA rather than any of their rivals when they travel the world for international contests and events.

hen pushed for clarification on why they still carry some items and not others, they have said, “The redefined list of sports equipment takes into account a number of factors such as limitations of airport baggage systems and size and weight restrictions in the aircraft hold. Some items are simply not suitable for airport baggage systems to handle or travel in the aircraft hold due to size and weight restrictions, as well as customer demand. We carry significantly more items such as golf bags and skis, which means we are able to put more robust processes in place to handle them.”

The National Director of the BSA, Karen Walton responded: “BA still seems determined to believe that there are very few surfers, windsurfers and canoeists who use their global flight routes. In less than two weeks, we have garnered the backing of tens of thousands of water-sports people around the world, the involvement of Parliament and major exposure from local, national and international media as well as strong working relationships with other highly influential surfing and water-sports governing bodies.  Despite this, I am shocked that BA’s spokespeople can still state that they believe that the amount of people affected is ‘tiny, miniscule’!”

Mrs Walton added: “The airline stands to lose financially as well encountering serious negative effects for their reputation if they do not reverse their decision. Britain is an island and BA is the most extensive carrier to our own islands as well as to hundreds of global surf destinations. Surf and water-sports tourism is a massively growing global industry and now that we have MPs on board as well as BA’s biggest airline rivals, we will be continuing to lobby for them to reconsider this ludicrous ban.”

The BSA recommends the following steps for people who are concerned and would like to add their support:
1)    If they are in the UK, contact their local MP and ask them to sign and support the Early Day Motion.  Contact details for MPs can be found by visiting www.theyworkforyou.com . Once active, details can be found by visiting edmi.parliament.uk/edmi
2)    Go onto www.britsurf.co.uk and click on ‘sign the petition’ in the ‘TRAVEL NEWS: B.A. to Ban Surfboards’ box on the home page.  Follow the easy steps to sign this online petition and add any comments.
3)    If you have a Facebook account, join the Facebook ‘British Airways Surfboard Ban’ group
4)    Click this link http://www.britishairways.com/travel/custrelform/public/en_gb and register a complaint with BA directly
5)    Encourage all other surfers and water-sports enthusiasts to follow these steps