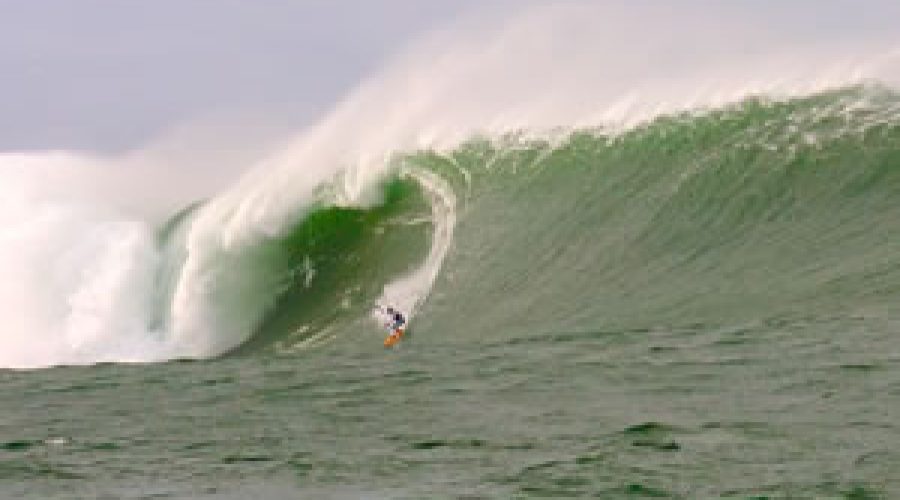 A Cornwall based surfer has surfed what is believed to be the largest wave ever ridden in Britain or Ireland when he tackled a monster wall of water around 60ft high.

Duncan Scott from Newquay and his tow partner Alistair Mennie rode the huge waves off Mullaghmore Head in south Donegal Bay, Ireland on one particularly big Saturday in December 2007.

Along with other tow team Gabe Davies and Ritchie Fitzgerald, they motored out at first light on two jetskis to await the arrival of the massive, storm-driven swells.

The dedicated, professional group were chasing monster waves resulting from the largest ocean swells ever predicted by the Marine Institute’s weather buoys (14 metres).

With manageable winds forecasted for the early morning, ahead of the arrival of the full brunt of the storm, the surfers had a fleeting window for tide, wind and swell to coincide favourably.

The session produced what appears to be the biggest ridden surf ever recorded in the British and Irish Isles. It was, for these surfers at least, the ‘perfect storm.’ “You could wait years for another opportunity like this," commented Portrush’s Al Mennie. “None of us have ever seen a more promising forecast to tow into some of the biggest waves of our lives.”

The surfers had been watching the internet weather and swell forecasts for days in anticipation of the swell’s arrival. The Marine Weather Buoy Network showed that waves with a height of up to 14m, about 45ft, could occur in the seas to the west of Ireland. Previously the biggest waves recorded by the Marine Institute's data buoys were 13.4m, about 40ft, in January 2005.

The unique set-up of Mullaghmore Head, where open-ocean swells jack-knife up over a shallow reef ledge, magnifies these swells vertically. The deepwater volume and energy of the swell is forced upwards, translating into several wave faces ridden over the 60ft mark.

The crew, all professional surfers and watermen, chose to utilise the jetskis as both launch vehicle, propelling them into the unbroken waves, and as a rescue tool.

Newquay’s Duncan Scott, chairman of the British Towsurfing Association, who bagged the biggest wave on the day, said: “There is a physical size barrier to what size wave a person can paddle into by arm power alone and today exceeded that limit – the waves just move too fast.

“We have trained extensively with the use of jetskis as rescue craft to enable a safer approach to very demanding oceanic conditions. It was incredible to be out in the ocean with so much energy running through it. It was an unforgettable session.”

Combined with the technology was the surfers’ own dedication. Years of surfing development and travel to locations like Hawaii, Mavericks in Northern California and Dungeons, off Cape Town, South Africa, have fostered both an appreciation and respect for the oceans’ power.

On ‘Big Saturday’ they returned to the beach buzzing with adrenaline, having successfully challenged a wrathful sea and surviving.

Recent surf spot discoveries like Aileens, beneath the imposing Cliffs of Moher, and Donegal’s Mullaghmore have put Ireland’s big wave potential firmly on the global map.

In a reversal of traditional perceptions and travel routes to big wave locations, surfers from Hawaii, California, Australia and South Africa are now journeying to surf in Ireland. The session in Donegal Bay will cement Ireland’s growing big wave reputation.