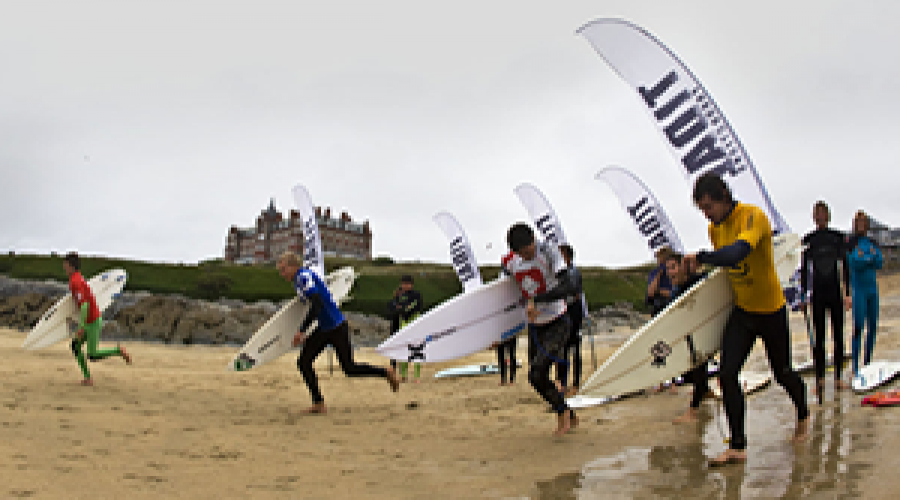 The second annual CARVE ESF Inter-Company Surf Battle took place at Fistral beach Sunday 26 July. The building swell, offshore wind and driving rain made for a physical battle that all nine teams got stuck in to.

The contest takes the format of an exciting tag-team event: surf companies enter three guys and one girl who must catch two waves each, including one self-nominated ‘double whammy’ wave for a doubled score.

With a massive six-foot fresh west swell pumping through it almost became an iron man contest, with many teams not getting back to the pen in time and incurring a hefty 15-point penalty. But the finals were reached and six solid teams remained for the pushing high tide swell.

In the end it was team Quiksilver, comprising of the youngest competitor 15-year-old Tom Good alongside the oldest, 42-years-young Grishka Roberts, backed up by team-mates Eugene Tollemache and Hannah Harding, who surfed consistently all day to take this year’s title.

One of the highlight performances came from Team Hurley’s Josh Piper, with CARVE photog’ Jason Feast later claiming, “His performance wouldn’t have looked out of place in a top level QS final.”

The raffle, indoor barbecue and after-party went off at the Carnmarth Hotel’s C-Bar, helping to raise well in excess of a thousand pounds. The focus of the event was to raise funds to send the English surf team to the European championships to be held later this season in Jersey. Through the raffle and entry fees the ESF earned well in excess of a thousand pounds for this worthy cause.

A big thanks goes out to contest organisers, particularly Tony Good for his efforts on the day. Pauly Jeffries from the ESF commented, “We would like to thank everyone for getting on board and actively backing English surfing, particularly CARVE Magazine, the competitors and all the officials who gave their time for free.”