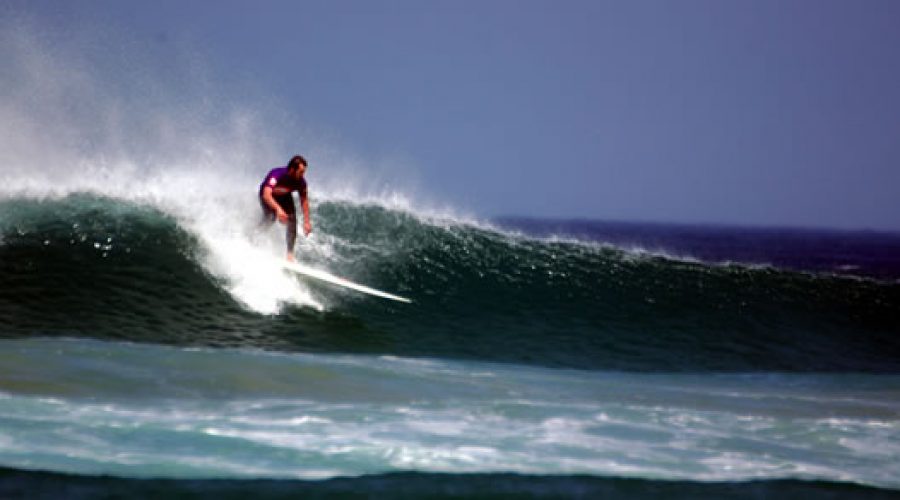 The life of the longboard

Longboards are back! Some may say they never went away but few can ignore the renaissance taking place on Cornish beaches. Current British champion Sam Bleakley charts the rise, fall and rise again of the laid-back surf form. Fashions may change but there is one constant in surfing – style. Longboarding encapsulates style better than any other form of waveriding. Expressive, explosive or minimalist, it’s about making hard things look easy and walking the board. What sets longboarding apart from other forms of surfing is the nose ride. Similar to riding the tube, time spent on the nose seems to expand and happen in slow motion – an artform every longboarder dreams of mastering. The consistent beach breaking waves along the Cornish coastline are perfect for practising this. At locations like Sennen Cove, Widemouth Bay and Porthcurno, where the quartz sands and granite cliffs skirt the Atlantic, the setting for the sport of longboarding is unrivalled.

During the early Sixties Cornish beaches were injected with a regular flow of Australian and South African lifeguards who worked the summer season. They paraded a new lifestyle amidst a population reacting to the austerity of the post-war years. In the social revolution that followed, a more affluent freethinking generation flowered into vibrant alternative scenes, like the surf culture in Cornwall. While the burgeoning beach life in Newquay was centred at Watergate Bay, Tolcarne and Great Western, Penwith had its own hub – St Ives. The local Surf Lifesaving Club was the breeding ground for the town’s first generation of longboard watermen. The undisputed silver surfer from this era was Charles Williams. Charles, his twin brother James, and Dave and Pete Griffin learnt to stand up on the 12-foot hollow marine ply rescue boards in 1959 and became instrumental in starting up foam and fibreglass board construction a few years later.

“We shaped our first boards out of brown refrigeration foam that came in three-by-two foot blocks which we ordered from a company in Liverpool and we made the fins in woodwork classes,” says current St Ives teacher, Dave Griffin. Regardless of whether it was Newquay-based Bob Head, Redruth’s Bill Bailey (who combined to become Europe’s first commercial surfboard manufacturer – Bilbo) or the St Ives surfers who built the first fibreglass surfboards in Cornwall, surf communities were spawning all over the county. By 1965 the surf industry had emerged from working class roots, spreading expertise, enterprise and cool, which blossomed in the Westcountry.

A star is born

Cornwall had its first surfing superstar when Watford born, Australian raised, Rodney Sumpter moved in. “His nose-riding ability was mind-boggling,” says Charles Williams. A World Junior Champion by 1964 Sumpter moved to Newquay two years later, won the British and European titles and finished fifth in the Senior World Championships on his longboard, flushing our surfing shores with pride. Tall and graceful, Sumpter had a spontaneous cat-like finesse, superior to any surfing performance ever before witnessed in Cornish waters. He was the complete professional package, living evidence of an ability to make a career out of surfing and the first British surfer to achieve international recognition.

“Rodney had a real affinity with the area,” says Cornish born surf champion Roger Mansfield. “He loved the landscape and the people and realised that on any given day the waves could be as good as any beach break in the world – relatively empty and ideally suited for longboarding.” This was a period when celebrity youth cult reached a peak, as models, artists, writers, athletes, pop and rock stars and even the future king of England were attracted to surfing. Rodney marketed himself superbly, gliding into the Bilbo factory in Newquay with professionalism and a fusion of futuristic ideas. “People had raw talent, but nobody had elegance or refinement in Cornish surfing at the time,” says long-time Sennen surfer and academic Alan ‘Fuz’ Bleakley. “Rodney showed us what was really happening.”

Longboarding for the majority, however, was just about having fun. Penzance’s Antony ‘Chunky’ Penhaul remembers his first board: “It was a blue and white striped ten footer and it had a small nude picture inserted under the glass near the nose. You had to walk to the front to get your big toe on her breasts.”

Talking about a revolution

By the late Sixties “counter culture” was at its zenith and as society moulded a belief in personal freedom, lifestyles were pushed into experimental places. Minds expanded and boards contracted. Between 1968 and 1970 the ‘Shortboard Revolution’ saw surfboards decrease from 11-foot logs to six-foot rockets, leaving nose riding in the dust and exploding into a whole new era of vertical expression. “Chasing the curl” was a dynamic new movement that experimented with the power of the wave as a means of self-expression. A movement that Cornish surfers Roger Mansfield, Tigger Newling, Charles Williams and Chris Jones excelled in.

While the Celts continued to dominate the European contest scene, revolution became evolution and by the late Eighties design had gone full circle. Looking for something fresh in the mid-Eighties, surfers found a lot of fun in an old familiar place – on the nose. The re-discovery of nine-footers and knee-paddling woke surfing from its Day-Glo, brighter-is-better days. Roger Mansfield helped fuel the longboard renaissance in Kernow with the Malibu Masters contests he organised at Watergate Bay. Style was back and Rodney Sumpter re-emerged to claim the national title in 1988.

Throughout the early Nineties the old guard still clung to the longboard throne. But with modern lightweight fibreglass material, combined with the traditional longboard aesthetic that radiated from the Joel Tudor-inspired revival in California, a whole new generation of youthful longboarders would emerge. When Tudor, a blonde haired pre-teen prodigy, hit the scene, the typical longboarder was regarded as a throwback who could not make it on a shortboard. Tudor was caught on celluloid curling ten toes over the nose and BOOM – the longboard rebirth bomb was ignited.

Surfing’s retro revival may have been in the works already, but Joel certainly made it a hell of a lot more cool. Tudor was driven to create an artform founded on nose riding, footwork and trim, then hauling this into the pressure-cooker of the present. This was destined to flourish in the small, but consistent waves in Cornwall.

St Agnes surfer Robert “Minnow” Green recalls the early Nineties. “Longboarding’s renaissance was snowballing,” says Minnow. “Australian former World Champion Nat Young and French clothing company Oxbow did a tour of Europe with Joel Tudor. Myself, Rod Sumpter and Keith Beddoe were flying the flag for Cornwall, but all the big competitions were in France. When Oxbow came to Cornwall I was asked to run a longboard event at Fistral Beach. It was so popular it inspired me to begin the British Longboard Union (BLU) in 1996.”

Today, Minnow manages the Cornish team and is the charismatic chairman of the BLU, the UK’s most successful tour of longboard competitions and the social epicentre of the longboard community. More importantly, the BLU has been a forum for the emergence of a new generation of world class Cornish longboarders. These have included frequent national champions and international achievers like Lee Ryan, Richard Balding, Nick Carter, Ben Skinner, Chris Thomson and multiple European Champions Will Eastham and Sam Bleakley. While their shortboard colleagues needed to travel abroad to master the timing and power essential to be an elite professional, the Cornish waves allowed this generation of professional longboarders the chance to rub shoulders with the globe’s greatest and show off their smooth styles and stellar nose riding.

“The BLU contests are a real buzz and we seem to be getting more and more women entering now which is fantastic,” says former British Champion Emma Fitzhenry. Emma is part of a strong crew of Cornish stylists, such as Jane Birch, Louise West, Sophie Skinner, Dominique Munroe and Sara Bevan, who are regulars at BLU events in Cornwall and North Devon.

Thanks to Minnow’s support and guidance, a new generation of teenage longboarders is emerging, including James Parry and Adam Griffiths, once again proving that the gently sloping Cornish waves can create top-class longboarders. Adam and James will be surfing for the Cornish team this summer at the Inter-Celtic Watersports Festival in Perranporth.

Innovation and experimentation form a core part of the longboarding ethos; and these traits taint Hayle boardrider Chris Ryan’s own journey. After watching the infamous Big Wednesday in 1980, Chris discovered the beauty of longboarding. Today, the Hayle born and bred surfer is a musician, mechanic, artist, vintage board collector and writer who loves riding his local beach break.

Ryan remarks, “How can I complain about Godrevy and Gwithian? With three miles of golden sand you can always find your own empty wave.” This is where Ryan came up with the idea of making a surfboard out of something more hard wearing than fibreglass – metal. “The trouble was, every time the board slapped the water it sounded like someone banging a 45-gallon drum with a spanner,” says his friend and St Ives longboarder Jamie Pardoe, who is one of the few Cornish surfers to regularly charge Porthleven on a nine-foot board.

It seems that Cornwall has a natural affinity with longboarding. The huge choice of sandy beaches located on various facing coasts are perfectly suited for nose-ride styling. Sennen, St Ives, St Agnes, Perranporth, Watergate Bay, Polzeath, Bude, Perranuthnoe and Praa Sands have become focal points of the Cornish longboard culture. And with consistent two to four-foot wave conditions all year, it has became clear to many surfers that the longboard is the ultimate tool for good times in the ocean. Whether as easy-to-paddle reminders of a golden era or a freshly discovered joy, longboards accentuate the fun of surfing. And Cornwall’s crystal water is a continual source of inspiration for us all. Toes Over!

Sam Bleakley is a professional surfer and freelance writer from Sennen Cove in Cornwall. Twice European Champion, reigning British Champion and multiple English and BLU tour Champion, Sam is currently in 21st position on the ASP World Tour. Sam is sponsored by Oxbow and Vans.

Some surf schools provide specialist longboard tuition and workshops. These include: