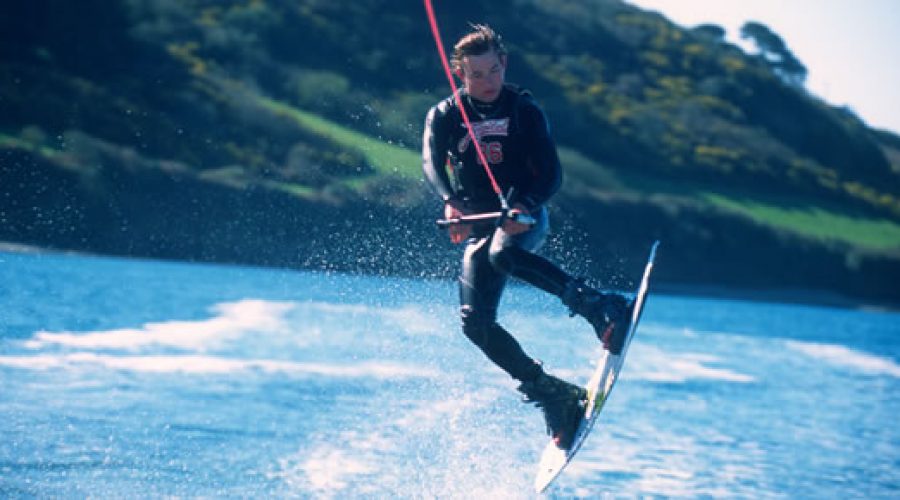 Being dragged at speed behind a boat may not be everyone’s idea of fun. But our novice fell head over heels for the thrill of wakeboarding. Skimming across the water looked easy as I watched Ben demonstrate his wakeboarding skills. Getting air and pulling 360’s, he made it look like a ride in the park. Our picturesque playground for this adventure was a pristine part of the Carrick Roads on the Fal estuary. For more than five years Adam and Ben Davis have been riding the wake in this secluded beauty spot. It’s only fair that they set up a commercial venture to let others come and have a go; and I was one of their first customers.

Ben explained the basics very clearly before I went overboard: “Tuck your knees tightly into your chest, keep your arms straight, feel the tug, roll up over the board, twist the nose forward and you’re off. Over you go.” I unceremoniously flopped into the ocean with my feet locked in an ungainly stance on a spanking-new board. Ready to ride.

The V8 engine of the Ski Nautique purred into action and I got into position, bobbing on the surface like an upturned fishing pot. As the rope took up the slack the ‘tug’ happened in fast-forward, and I was crashing back into the water by the time I’d remembered the next instruction. It can take a few frustrating falls before you ‘pop up’ and get going, but the trick is not to try too hard and let the boat do the work. Second time round I was up, but I was so amazed to be on my feet that it didn’t last long. “Hands down by your hips, weight on your back foot, look up,” Ben hollered from the boat. Ignoring his top tip I had a good look at my feet and the line was jerked out of my hands as I thumped face-first into the wall of wake. Water gushed down the front of my wetsuit and I was stranded chest-down, waiting for boat to come back and retrieve me.

Once you’re up and wakeboarding it’s all about carving using your toes and heels to control the board – as soon as you flatten the board and catch a rail you’ll be checking out the seabed (its quite sandy I discovered). It wasn’t too long before I was cruising along one side of the wake, carving up and down the face of the water-ramp with an iota of novice style, and revelling in the fluid cocktail of speed and adrenalin. But there’s so much more to the world of wakeboarding, which is why having a fully-qualified and experienced instructor onboard makes a huge difference to the gradient of the learning curve.

“Right, now you’re going to crossover the wake,” Ben instructed as the boat passed to rescue me from yet another tumble. Up again, with my hands closer to my hips and the weight on my back foot, I steered a bumpy course over the frothy ramps, landing successfully in the centre of the wake and then over the next wave to the other side. Then once the hard bit was over with I was immediately thrown off balance, off the board and back into my fish-pot pose awaiting retrieval. As a beginner you do spend a bit of time in the water waiting for the boat to turn around and pick you up, but it’s no chore to take in a bit of Cornwall’s stunning south coast scenery, catch your breath and a get fed a few tips before you’re ready to try again.

Whatever level your wakeboarding is at, the Davis brothers can dramatically improve your riding in a twenty-minute session. It doesn’t sound long, but it’s a physically challenging sport and I don’t think my arms could’ve taken a minute more. Before time was up I’d managed to criss-cross the wake, ride the wave on each side and even attempted a few 180’s. If you’re already pretty nifty on a wakeboard then you can learn more advanced moves such as back flips, front flips, 360’s, grabs and riding switch.

A spot of fairy liquid and lot of brute force later and I’d unglued my feet from the bindings and climbed back on board. Buzzing. “In the summer we can take groups over to the beach for a barbecue”, Adam explained as he pointed towards the deserted sands that can be accessed only by boat. Only the wind chill reminded me that this was Cornwall and it wasn’t quite summer yet, but I still wouldn’t have refused a feast on a beautiful beach following my thrill-quota on the water.

When we arrived back at the base in Mylor Yacht Harbour, the morning’s experience was sealed in style with a hot power shower and a trip to the café. I’d always thought this million-dollar corner tucked behind the hubbub of Falmouth was reserved for those minted enough to moor their super-yachts here, but it’s a picturesque location set up to welcome all types of watersports enthusiasts. The Davis brothers run both a sailing school and wakeboard school bang on the waterfront, making Mylor a mecca for people that want to get out and learn how to play on Cornwall’s calmer waters. Those that don’t can always hang out in the café, do a spot of shopping in the chandlery and meet you in the wine bar after your hard day at sea.

If you’re nuts about watersports but not so nuts about the environmental issues of speedboats, you’ll be glad to hear that the boys will soon be raising their green credentials with a cleaner gas-fuelled engine. Frankly I can’t wait that long for my next shot at wakeboarding – and neither should you.

More information:
Hayley Lawrence had a 20-minute wakeboarding session courtesy of Falmouth Riders Club, Mylor. The school is open from April to autumn and caters for individuals, families, children and party groups (up to six in a group, but larger groups can be accommodated using support boats).

Cost:
£20 per 20-minute session (group and family discounts available)
There are limited places for intensive five-day courses in July and August, using world-class coaches from Belgium and Dubai (£400)