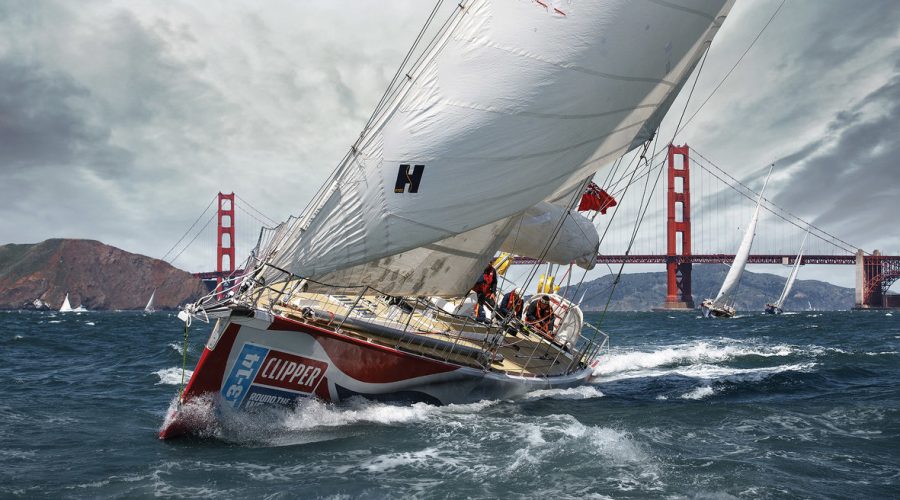 Three skippers from Cornwall will lead a crew of amateur sailors through Mother Nature’s toughest environments in the 40,000 nautical mile ocean odyssey, the Clipper Round the World Yacht Race.

Huw Fernie, from Falmouth, Ashley Skett from Newquay, and Peter Thornton, from Gorran Haven, will take on the huge physical and mental challenge, the only event of its kind for amateur sailors, when the race starts on August 30, 2015 from the UK.

Peter Thornton, 36, from Gorran Haven has seen his sailing career progress from the Gorran and Mevagissey Sea Scouts to being awarded an MBE at the age of 25 for a period of service as the Flag Lieutenant to the First Sea Lord and Admiralty Board at the Royal Fleet Auxiliary. He said: “I applied to be Race Skipper because I have the desire to put what I’ve learnt at sea so far into a race which I really believe has no equal.

“I want to build others’ confidence to be comfortable and feel the exhilaration of being in the zone, in the middle of an ocean in a team racing a fast yacht. My life as a bit of an extreme sports opportunist and a career as a seafarer has thrown a few interesting challenges my way – from high intensity postings and emergencies at sea to loan stormy winter surfs and jumping out of planes. However, this is definitely up there as one of the most significant.” The Clipper Race is one of the world’s toughest challenges. 40,000 nautical miles long, taking almost a year to complete, this is the only event of its kind which gives amateur sailors the chance to sail round the world, taking on Mother Nature’s most remote conditions. Fewer people have completed the Clipper Race than have climbed Mount Everest.

The race sees twelve teams compete against each other on the world’s largest matched fleet of 70-ft ocean racing yachts, designed for speed not comfort. Crew represent over 40 different countries and can choose to compete in either the full circumnavigation or individual legs. The only professionals on board are the skippers who safely lead their team.

Ashley, 31, from Newquay is a former firefighter and Royal Marine who learned to sail dinghies off the Cornish coast as a child. Explaining why he thinks completing the Clipper Race will surpass that: “Training for the Royal Marines hardened me up and gave me some valuable experience of working together as a team and pushing my limits. The Clipper Race is totally unique so the opportunities to do something similar are very few.

“Without doubt the Southern Ocean is the leg I am looking forward to the most. Rounding one of the great Capes is a big deal for any sailor and I am desperately looking forward to surfing down waves as big as houses and the challenge of sailing in some of the toughest conditions imaginable.”

On what drove him to apply for the Race Skipper position, Huw, 31, who turned his back on a career in aeronautical engineering for his real passion of sailing, said: “It felt like the timing was right because I’ve known about the Clipper Race for so long. I have had a lot of encouragement from previous race skippers and also from the crews I’ve trained where I have worked as a training mate since 2012. I’ve always wanted to sail around the world and the challenge of doing it in a race seems like a great idea.”

Speaking about the selection process, Clipper Race founder and legendary sailor Sir Robin Knox-Johnston, said: “Our Race Skippers are put through rigorous trials before we appoint the successful candidates. Nothing can fully prepare you for the challenge of sailing round the world with a crew of amateur sailors, so we have to be sure we choose skippers, who not only possess the best sailing skills, but also have the right temperament and are good with people in highly stressful environments.

“It’s a race so of course everyone wants to win. However the most important characteristics for a Clipper Race Skipper are a true sense of seamanship and to be safety conscious. I am sure Huw, Ashley and Peter will relish the adventure that lies ahead.”

The 2015-16 Race departs from the UK on August 30, 2015 and will return almost a year later after visiting six different continents in up to 15 individually scored races. The team with the highest total points at the finish wins the Clipper Race Trophy.