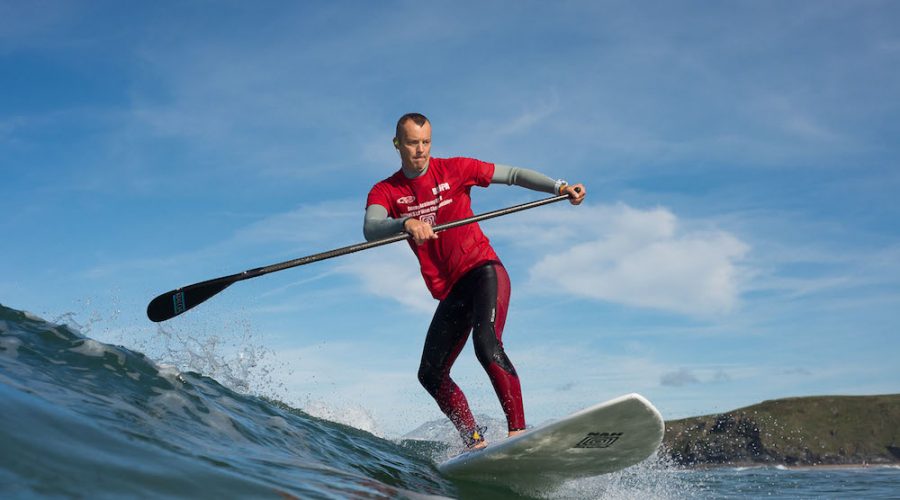 Britain’s best stand up paddle surfer will be crowned National Champion at Watergate Bay in Cornwall in early October.

The sixth annual British Stand Up Paddle Association (BSUPA) National Championships will once again be hosted by the Extreme Academy on the weekend of 4 and 5 October 2014.

Stand up paddle (SUP) boarding is one of the fastest growing water sports in the UK. Described as a cross between canoeing and surfing, riders stand up on a large style of surfboard and use a single bladed paddle to steer, turn and propel themselves through the water and onto waves.

Organiser Richard Marsh said: “In addition to a full men’s category, last year we saw an increase in both women and junior competitors. We also had entries from some high-level British surfers, like Tom Lowe. It’s great to see the sport developing and strengthening in all sectors and a lot of that is through the support of the Extreme Academy.

“It is the only dedicated SUP surf event in the UK, with many other events focusing on flat-water or distance racing. This is the sixth year of these championships at Watergate Bay, it’s become an established event on the Extreme Academy’s calendar which is positive for the event and the sport itself.”

The National Championships will comprise of four divisions: Open Men, Open Women, U16 Boys and U16 Girls. Competitors will be judged on their style and how they ride the waves much like a surfing competition but with scores taking into account how surfers make use of the paddle.

Richard added: “Last year’s conditions were very good on the whole. We had about 3ft of clean waves for the final and we even had competitors just wearing board shorts and rash vests, it almost felt subtropical. We’re hoping for similar conditions this year and holding it over two days means we can really make the most of it.”