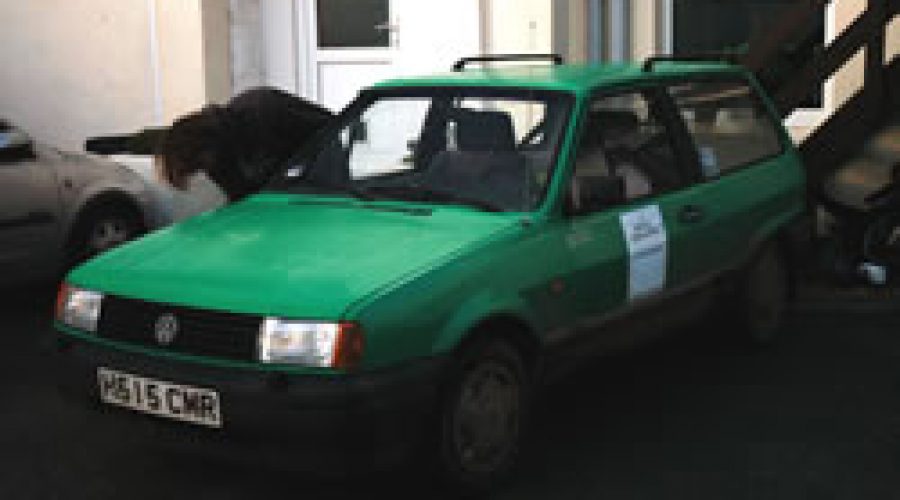 On Boxing Day, Tom Neal and Ian Holford will be setting off from Cornwall, stopping in Plymouth in an attempt to drive to The Gambia in West Africa.  They will be taking part in the 09/10 Plymouth-Dakar Rally in aid of Shelterbox.

Their expedition vehicle is not the normal vehicle of choice to go driving over sand choked dunes and searing heat, but Ian and Tom are confident that a 1991 Volkswagen Polo (‘Minty’) is perfect for the job.  Her 1.3 petrol engine has covered just over 200,000 miles in its life and in the tow years prior to Tom and Ian taking ownership, Minty resided unused and unloved in a farmers barn. Rescued from the scrappers, Minty has been brought back to road legal status and is now bound for a new life in The Gambia.

Ian said, “We’ve been thinking about some sort of adventure like this for a while now, largely down to us both being long standing fans of the ‘Long Way Round/Down series’. In all honesty I don’t think either of us ever thought it would come together. But slowly and surely, over the course of the last year it has, and now we suddenly find ourselves five weeks away from leaving…and not necessarily fully prepared. However, tha is in the spirit of the event… the people who run the rally call themselves, ‘dis-organisers’ and once you leave the rally is totally unsupported. No mechanics, support crews, back-up or medics. You get in trouble, you get yourself out.  I think it would be fair to say we are both a little nervous, but more excited, and really looking forward to getting going”.

The rally takes place over the festive period and into January. They will be covering around 3000 miles across mainland Europe, down through Morocco, Western Sahara, Mauritania, Senegal and into The Gambia. Once in Africa, the roads will be poor, the going tough, the distances intimidating and the heat insufferable. They will have to endure a three day crossing of the Sahara Desert, issues with landmines in Western Sahara and Mauritania is currently on the Foreign Office advisory list of countries not to travel to (unless essential) because of ‘terrorist’ concerns.

At the end of the rally, the vehicles will be handed over to a control committee who auction them (or whatever’s left) off for charity, with all of the money going to local schools and projects in The Gambia. Unbelievably these cars which have virtually no value in the UK raise good money in Africa due to the high demand for vehicles. Over the lifetime of this event, the vehicles auctioned off in The Gambia so far, have raised nearly £1,000,000!

Ian and Tom chose ShelterBox as their charity of choice.  It is an international disaster relief charity based near Helston in Cornwall, that delivers emergency shelter, warmth and dignity to people affected by disaster worldwide.  They instantly respond to earthquake, volcano, flood, hurricane, cyclone, tsunami or conflict by delivering boxes of aid.
Each box supplies an extended family of up to 10 people with a tent and lifesaving equipment to use while they are displaced or homeless. The contents are tailored depending on the nature and location of the disaster, with great care taken sourcing every item to ensure it is robust enough to be of lasting value.
The cost of a box is £490, including delivery direct to those who need it. Each box bears its own unique number so as a donor you can track your box all the way to its recipient country via the website. Highly trained ShelterBox Response Teams distribute boxes on the ground, working closely with local organisations, international aid agencies and Rotary clubs worldwide.

Tom and Ian added, “Please sponsor us and help us on our drive to Africa. Every penny donated will be a massive boost to us on the way. Knowing that we are doing some good whilst digging our car out of a sand dune in 40º heat will be the motivation for us to get to the end, even if we end up pushing the car to The Gambia – a worryingly possible scenario! So all we ask is that people dig deep and donate to www.justgiving.com/ianandtomdriveafrica“.

Adventure Activities Cornwall wishes Tom and Ian all the best!!