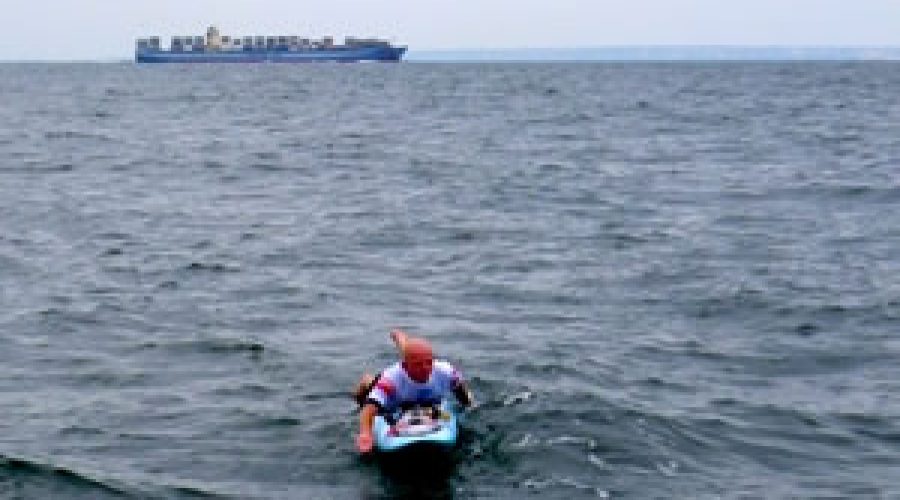 Four hardy surfers completed a marathon paddle across the English Channel on Tuesday 26 July, and raised almost £3000 for the charity Surf Relief UK.

After being beaten by the weather in 2010 and earlier in 2011, the foursome finally completed the 23 miles from Dover to Cap de Griz in France in a very quick time of 5hrs and 23minutes.

They just had time for a very quick drink at one of the restaurants surrounding the beach, before paddling back out to their waiting support boat and being whisked back to the UK.

The sea state on the day was described as ‘slight’ but still plenty choppy enough to make paddling tiring, particularly for their shoulders and backs.
A number of very large ships passed by on this epic journey, but in the good hands of the skipper of the support boat the ‘Sarah Ray’ with all its radar technology, they were in safe hands. The team crossed, by working in pairs with 45 minutes on, and then 45 minutes off as the number of boards permitted was restricted to two.

One of the paddlers, Phil Williams from Nailsea near Bristol commented: “The first two legs started out well, but by the time I was half way through the third leg, in the middle of the deepest part of the channel, it became quite choppy, and my back and arms really began to ache.

“It was an amazing experience finally paddling on to the French beach, and quite amusing to see the reaction from the local tourists! It was a fantastic experience, with a fantastic team of back up support, stoked we made it and raised some good funds for the charity ‘Surf Relief UK’.

The aim of the paddle was to raise money  for the charity’s Surfable project, which provides disabled children and young people with surfing experiences through a network of surf schools across the UK.

The money raised will give around 400 children a unique and often life changing experience. For more information on the charity and the paddle challenge go to www.surfrelief.co.uk