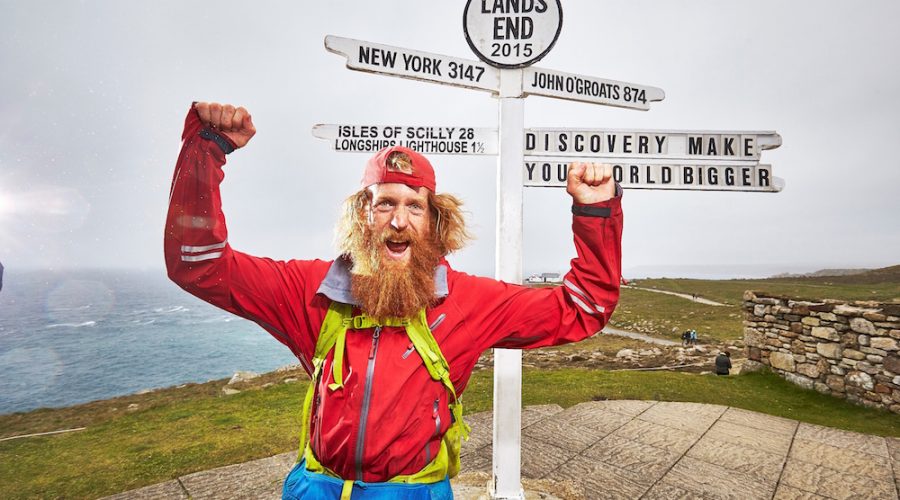 Extreme endurance adventurer Sean Conway today became the first person in history to complete the Ultimate British Triathlon, after finishing his extraordinary attempt to run the entire length of Great Britain – from John O’Groats to Land’s End – totally unsupported, carrying all his own kit, including a tent, and sourcing food and water along the way.

The 34-year-old adventurer covered nearly 1,000 miles in six weeks and was followed every step of the way by Discovery Channel who will chart the highs and lows of his run south – the equivalent of 38 consecutive marathons – in a special one-off documentary, Sean Conway: Running Britain, to be broadcast on Thursday 25 June at 9pm.

Over the course of the epic challenge, Sean took over 1.5 million steps to reach the famous Land’s End signpost, averaging over 25 miles a day and included several days where he achieved distances of roughly 40 miles.

Sean’s progress was tracked, in real time, by more than 60,000 people on the discoveryuk.com website via GPS technology, with members of the public pin-pointing his exact location to run alongside him as part of the #runwithsean messaging encouraging them to do so. Along Sean’s journey, people travelled hundreds of miles to find him, with the most ardent follower hitch-hiking from Caen in north France to join him in Bristol.

He started his challenge by cycling the length of Britain, a whopping 1,300 miles, and followed that by becoming the first and only man in history to swim the length of Britain, a 900 mile journey, for which he grew his trademark ginger beard, to ward off jellyfish stings. Sean’s last attempt at the run in 2014 ended in a very public failure after he injured his knee whilst taking a selfie, and had to call it a day.

Sean commented: “It all began because I realised I had a need to push myself physically and mentally to live my life to the full. The run was incredibly tough, tougher than I expected, but the passion and support of the British public throughout my journey was tremendous and without them I do not think I would have accomplished this historic feat.”

“I really needed to make this run happen because failing it a second time round was not an option for me. I’m relieved to have finished now and look forward to challenging myself and my aching limbs to something else in the not too distant future.”

Throughout his journey, Sean used his camera phone to post video blogs and pictures to fans online and by doing so attracted over 7,500 new Twitter, Instagram and Facebook followers and friends. The inspiring story told through social media platforms was one of stunning scenery and landscapes truly illustrating the best that Great Britain has to offer.

Born and raised in Harare, Zimbabwe, Sean had an adventurous upbringing in the Mana Pools National Park. He came to the UK in 2002 with just £100 to his name and started working in Cambridge cutting 12,000 cabbages a day whilst pursuing a career in photography. Feeling dissatisfied with the direction his life was taking, Sean decided to sell his share of his company to his business partner – earning him the grand total of £1 – to pursue his dream and broaden his horizons.

The final leg of Sean’s incredible challenge began on 21 March as he pitted his mind and body against the rugged and unforgiving British landscape. With no set route or confirmed locations to set up camp, other than at his mum’s house in Cheltenham, Sean’s course was shaped by tips from locals he met along the way as he searched for the best possible route through the cities, towns and countryside of Great Britain.

Graham Lafferty, Head of Discovery Channel, UK & Ireland, said: “Sean Conway: Running Britain is a great story of an ordinary man taking on an extraordinary and inspirational challenge. Sean follows his heart no matter what the obstacles, and he personifies Discovery Channel’s ethos to Make Your World Bigger. To make history as the first person to complete the Ultimate British Triathlon is testament to what the human body and mind is capable of.”

For further details go to www.discoveryuk.com and visit the dedicated Sean Conway hub.