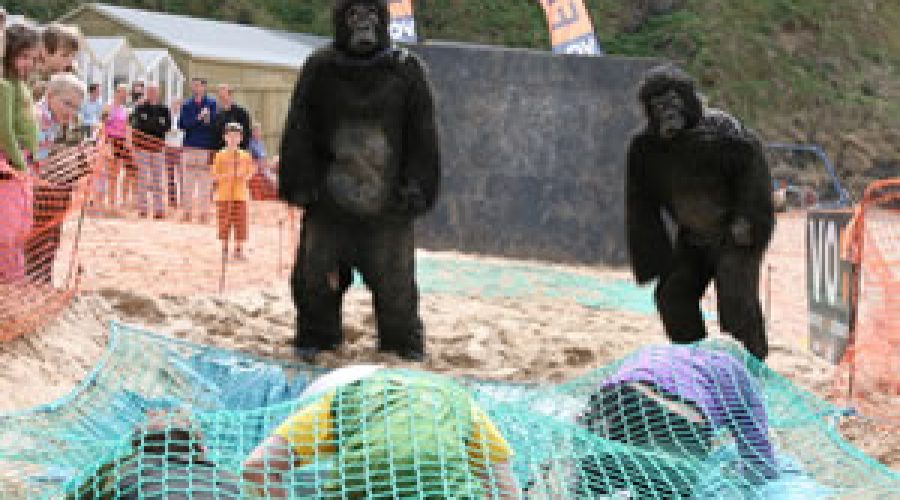 Almost 70 competitors battled it out in a tough test of fitness, agility, nerve and teamwork in the first ever Newquay Adventure Race at Lusty Glaze Beach in May.

A total of 23 teams of three people took up the challenge to get off their sofas and do something active over the Bank Holiday weekend by joining the multi-activity event, which is the first of its kind in Cornwall.

In the race organised by The Adventure Centre in partnership with Cornish endurance company VOTWO, competitors faced a series of gruelling challenges over the course of the event, which took between four-and-a-half and six hours to complete.

The combination of athletic and fun challenges included a 6km run and 30km mountain bike ride via a number of checkpoints in the Newquay area, which racers discovered using a mixture of map reading and orienteering skills.

Once back at Lusty Glaze Beach, the teams encountered a number of challenges organised by The Adventure Centre, including a cliff abseil, a vertical cliff obstacle course, a crawl through a simulated underground cave system known as the Rat Run and a 200-metre surfboard paddle.

And as if that wasn’t enough, the race ended with a beach assault course with scramble nets, a water pool and two big men in gorilla suits who tried to prevent exhausted competitors from climbing the 12ft wall and crossing the finishing line.

The race was hailed a resounding success by both organisers and competitors. An enthusiastic Richard Hudson from Green Room Dentistry said: “It was fantastic. I loved everything about it. If there was something I was good at, I enjoyed it. Then the things I was uncomfortable with were a real challenge. I especially liked the assault course at the end – it was a fun way to finish.”

The first team across the finishing line was Helpless but Happy from Perranporth. The super-fit trio finished well ahead of their closest rivals. Team member Matt Groves commented: “We usually do triathlons but this was something totally different. We’ve never done a race with so many different elements, which made it interesting. It was a surprise to win – I think the local knowledge helped a lot!”

The first female team to finish was the Blondie Cakes from Devon. Hannah Blore from the team said: “It was very tough and challenging but a lot of fun.”

Staff from the The Adventure Centre at Lusty Glaze instructed and encouraged the competitors through the more technical tasks at the beach. Centre manager Jeremy Griffiths said: “We’ve wanted to do something like this for a couple of years, so it’s great to be part of such a successful event. As an activity centre, an adventure race is right up our street.

“VOTWO have done a fantastic job at pulling this race together. It created a real buzz at the beach and we’ve now entered into a partnership to base similar events at the beach in the future.”

Ben Mason from VOTWO, which organises endurance events across the South West, commented: “It went incredibly well considering it was the first time. There were some things we weren’t sure about but it all worked well in the end and competitors enjoyed themselves, which is the main thing.”