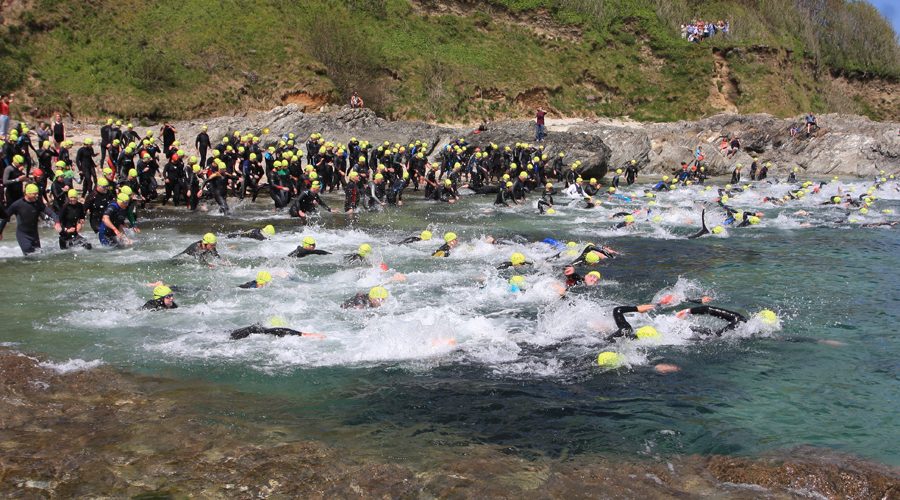 Adventurous swimmers from all over Cornwall and elsewhere in the UK descended on Falmouth in early June for the annual RNLI Castle to Castle Swim.

Almost 400 people took part in the challenging open water swim across the mouth of the River Fal, covering a distance of approximately one mile. The swim was organised by the RNLI to raise important funds for the lifesaving charity.

The competitors were greeted by near perfect conditions of bright sunshine and calm conditions, even though the water was unseasonably chilly. They were joined by EastEnders star Steve McFadden who plays the role of Phil Mitchell. He is a keen supporter of the RNLI and has taken part in the swim twice before. This year he clocked up a time of 37 minutes and 36 seconds and said he’d enjoyed the swim, especially as this year he shaved 10 minutes off his previous best time.

The first swimmer across the finish line was Haddon Page from Redruth who completed the mile long swim in 22 minutes and 9 seconds, just 42 seconds short of the course record. Fastest woman home was Emily Theobald who also took the under 18 title with a time of 24 minutes and 55 seconds. Emily, who is from Falmouth, was swimming in the event for the first time and is a member of the Portreath Surf Lifesaving Club.

The last person to finish the sea swim was Peter ‘Bunny’ Bartell from St Agnes who is in his late sixties. He was greeted by the loudest cheers of the day from the crowd watching the swim when he stepped ashore after one hour, 15 minutes and 11 seconds. Peter said he had found the water very cold but that the RNLI lifeguards had been extremely supportive during the swim.

It took an army of 50 volunteers to run the event which raises around £30,000 a year for the RNLI.  In sunshine and calm but cold water, the swimmers set off from Pendennis Headland on the Falmouth side, heading for a small beach on the St Mawes side of the river.

Guy Botterill, RNLI Community Fundraising Manager, was the event organiser and says the biggest thank you must go to the volunteers who ensured the event was a success  .

He said: “It takes more than 50 volunteers to run the swim, from the RNLI lifeguards and lifeboat crews who play a major safety role on the water, to harbour teams from Falmouth and St Mawes, kayakers from as far away as St Austell and including Mark Bower who runs a kayaking business in St Mawes and members of Surf Lifesaving Clubs in Portreath, Perranporth and Hayle.  There were also members of Falmouth Diving Club, RNLI fundraisers, Tim Goldburn and the list goes on.

“I can’t thank them enough for their support and hard work, especially as for some of them the day began at 5am this morning.  It’s hard work but worth it because of the money the swim raises for the RNLI to support the charity’s work saving lives at sea.”

The swim was officially started this year by Matt Vernon who is a Mussel Diver who tried valiantly to save a woman from her car earlier this year when it rolled in to the River Fal where the King Harry Car Ferry crosses.  He was praised for his bravery after diving more than a dozen times to try and help Ann Pewter who was trapped inside the vehicle.

All the swimmers finishing the event were presented with a special commemorative t-shirt and a bottle of water, and prizes, sponsored by Steve Coram of Cycle Logic in Helston, were given to the winners. 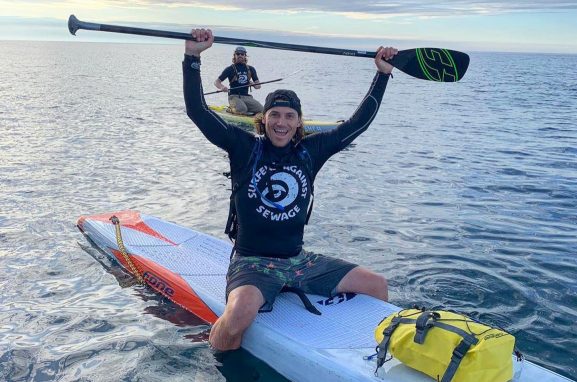