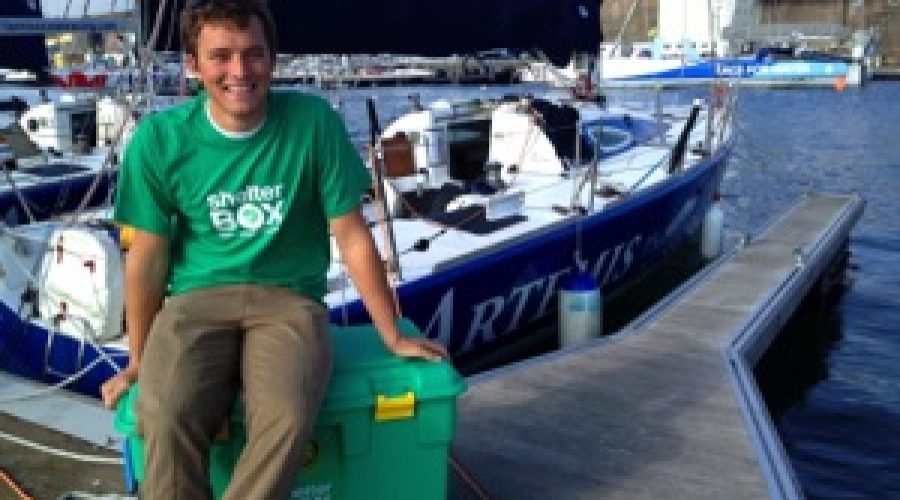 Sam Goodchild, a future star of British offshore sailing, has pledged his support for Cornish disaster relief charity ShelterBox. The successful Falmouth sailor will be promoting awareness of the charity throughout the year’s races and events.

Sam was motivated to find out more about ShelterBox having been personally affected by disaster as a child. Weeks after being born in the UK, Sam flew across the Atlantic to live on a sailing yacht with his family.

They lived on a boat for eight years, based mainly in the Caribbean before eventually settling down in a house in Grenada in 1999. In 2004 Hurricane Ivan devastated the island forcing Sam to move back to Cornwall to finish off his education

ShelterBox was one of the first UK charities to respond to Hurricane Ivan sending 100 ShelterBoxes to help those affected.

Sam said: “Hurricane Ivan destroyed most of the island of Grenada, including schools, hospitals and many businesses,’ said Sam. ‘After the hurricane I moved back to Falmouth to finish my education, and it was here that my path crossed with ShelterBox once again.”

Sam has since become a successful offshore sailor. He competed in the double-handed Round Britain Race in 2010 and was then selected to join the Artemis Offshore Academy which allowed him to train with the best Figaro coaches for offshore racing. He then won a scholarship, which allowed him to compete in the 2011 Figaro circuit, including the Solitaire du Figaro.

He has competed in numerous races since then and looks set to become one of Britain’s most successful young sailors. “I am excited to be able to support ShelterBox on my travels as I work towards the pinnacle of solo sailing, the Vendée Globe. I will be using a ShelterBox as my dock box for racing and I am privileged to promote them, and the excellent work they do across the world wherever I go.”

Tim Bunting, ShelterBox UK General Manager: “We are delighted that Sam Goodchild has chosen to support ShelterBox as he has strong links to Cornwall and direct experience of the sort of disasters that ShelterBox respond to during his time in Grenada. We are happy to be working with him to promote our disaster relief work around the world wherever his solo offshore racing careers takes him.”

After kick starting 2012 by an impressive 8th place finish in the Solo Figaro Massif Marine, the first Figaro race of the year, against some top stars in the Figaro world. The next race for Sam is the double-handed AG2R Transat, a Figaro race from France to St Barths taking him back to the Caribbean before returning to France for the highly competitive Solitaire du Figaro.