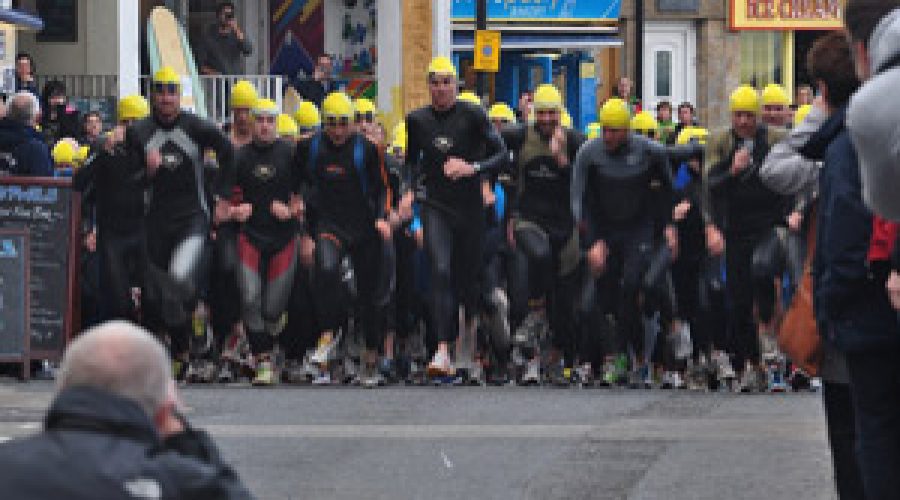 Despite rain, floods and challenging conditions, the 14th St Ives Biathlon took place on Saturday July 7 and was enjoyed by many, raising over £4500 profit.

Organisers – St.Ives Surf Lifesaving Club – with the help of a team of health and safety officials, changed the traditional route for the popular “Open Race” just an hour before the start time, to ensure that competitor’s safety was paramount.

With the inshore lifeboat team, the Harbour Master and members of the RNLI marshalling the sea section in boats, on stand-up-paddle-boards and on surf lifesaving rescue boards, over 170 people took part.

The junior route remained unchanged with George Hollis, aged 15, winning the Junior Race for the boys and Keia Wardman, aged 12, winning for the girls; the winner of the Open Race for the fifth year running and fastest overall for 2012 with a time of 00:21:15.15 was Neil Eddy for the men with Alice Nicholas leading the women.

All competitors started their run from the harbour slipway, along the coast path to Porthminster beach before entering the sea and swimming back to the starting point.  The Open Race also followed this route, shortened from Carbis Bay – where water conditions were deemed too dangerous – resulting in a 1k run and a 1.7k swim. However, to ensure a longer swim for the Open, buoys and cans were placed in the centre of the bay, taking the swimmers in a zigzag formation, before the home straight to the harbour, giving spectators an excellent view.

David Bonar, Chairman of St.Ives Surf Lifesaving Club explains: “The new swim course provided a serious challenge for some of the competitors not used to sea swimming, with huge sets dumping on the shore of Porthminster Beach! I know the thought of “bailing out” had crossed the minds of a number of competitors – so a big well done to all those who completed the swim and especially all first timers who couldn’t have picked a more challenging swim for their first Biathlon!”

As well as notable weather conditions for its 14th year, the crowds of supporters were bigger than ever, with hundreds of spectators turning out to shout encouragement. The route was packed with cheering crowds, especially on the harbour slipway where people started their run and finished their swim.  There was such support that some competitors who had finished swam back out to encourage friends and family members to the finish line.

As well as the cheering crowds, David also thanked the people who made the event possible this year. Money raised through corporate support and entry fees will be used by the charity to help pursue a long held dream of building a new club house and community hub on Porthmeor beach.