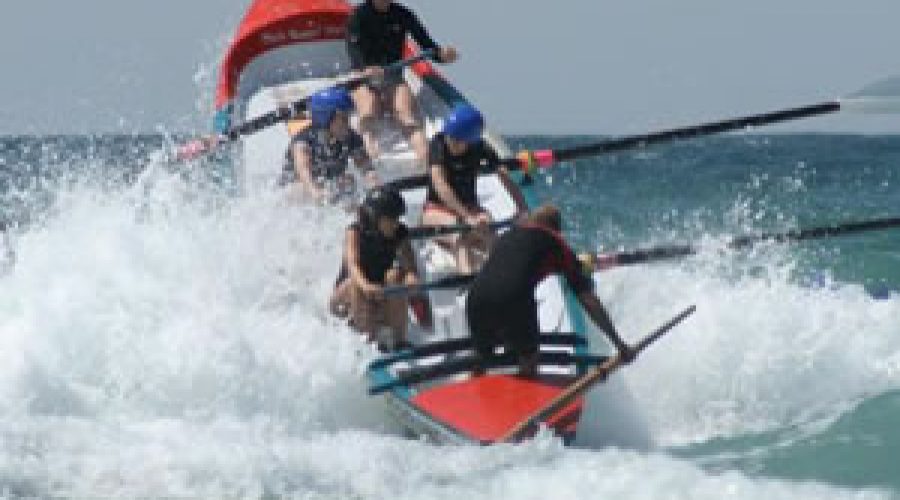 Surfboat racing returns to Watergate Bay, North Cornwall on Saturday 14 July 2012 with teams eager to prove themselves at one of the sport’s most challenging venues.
The Extreme Academy will host crews from across the UK taking part in the third of five events in the UK Surf Rowers League (UKSRL) Summer Series.
Originating from Australia, the oar-powered surf boats compete in short, intense races in which the crews power through the approaching waves out to a ‘turning buoy’ 400 metres off the shore, before racing back to the beach by catching a wave. The winning team is the first to cross the finish line with at least three crew members and oars on board.
Races last anywhere between four and six minutes and require strength, determination and skill from the four-strong crew and sweep, who steers the 180 kg boat.
Peter Gaisford, President of the UKSRL said: “The surf has been small so far this season so Watergate Bay is the real testing ground. It’s the one venue that people get a bit twitchy about as it can throw a spanner in the works and affect a team’s point score.
“We really like Watergate Bay as a venue because of the support from the Extreme Academy and unlike many of the more sheltered contest venues, we can really put the teams through their paces.”
The first event of the 2012 series took place in Pembrokeshire and was won by current title-holders Porthtowan although the final result was close. All UKSRL crews have trained hard throughout the winter and organisers are expecting a close competition this year.
The winning men and women crews are those with the highest scoring league points at the end of the series.
Conditions on the day play a huge part and unlike many other sports, competitors are in the hands of luck.
Shelley Hardwick, the stroke in Perranporth Siren’s surfboat crew, experienced first hand how unpredictable the sport can be when her boat capsized during a competition at Watergate Bay in 2009.
Shelley said: “We had quite an epic wipe-out a few years ago when the back of our boat was hit by a big wave. The boat overturned because we rowed for two waves and missed them and found ourselves in the zone where the waves were breaking. Now we always row like mad coming in so we don’t find ourselves in the same situation.
“Surfboat racing is such an exhilarating sport as the conditions are never the same. Sometimes I feel nervous before a race but I am always buzzing by the time we get back to the beach.”
Surf rowing is often described as one of the most visually spectacular sports and this may be the basis for its gaining popularity in the UK. For Shelley and her fellow competitors surf rowing is an exciting way of keeping fit and is all about team spirit.
The first race will begin at 3.30pm on Saturday 14 July, an hour after high water so spectators can see all the action.