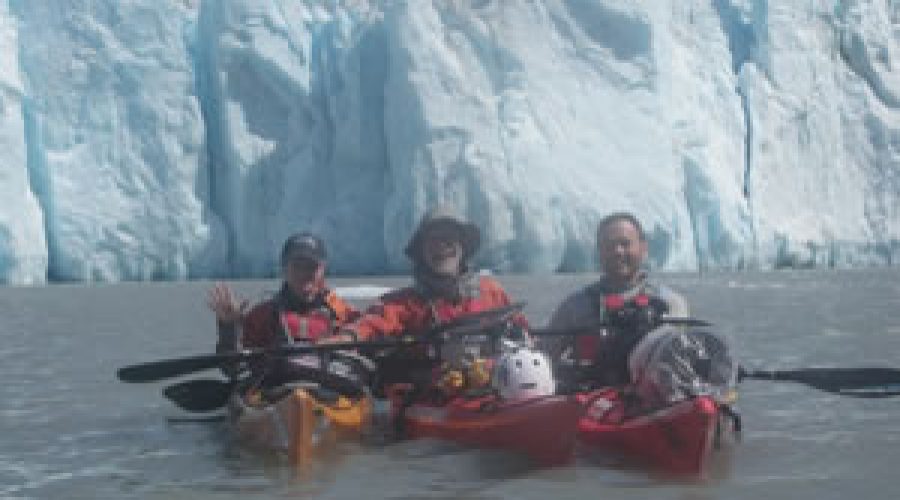 The Big5 Kayak Challenge Team completed a record paddle along the Inside Passage covering 850 miles from Port Hardy, Canada to Glacier Bay, Alaska in just 27 days.
Paddling Wilderness Systems kayaks that weighed a mind-boggling 65kgs each, the unsupported team of British and Irish kayakers averaged an incredible 30 miles per day, during their expedition.

The journey north during the last 4 weeks had been tough, though untimately successful despite long periods of strong head winds, torrential rain and high spring tides. The team also had to struggle through  a heavy storm for 3 days in Alaska. Their final push was scheduled to take two days from Alaska’s capital, Juneau, heading north to Gustavas and Glacier Bay National Park.  They almost failed due to a heavy northerly wind gusting at Force 6-7 and a tight schedule to cover 46 miles on the second day. Two members of the team, Aisling Ni Chuinn and Richard Harpham ended up paddling for a massive 21 hours to cover the 41 miles, arriving at 3 am for the connection to the Glacier Bay Park and two further days of kayaking around the Glaciers. The Big 5 Kayak team was led by Richard Harpham, raising money for the Muscular Help Foundation and raising awareness for the River Access Campaign. Their challenge was to paddle in a sea kayak 1000 miles from Vancouver to Alaska in 30 days.

Since leaving Port Hardy on Vancouver Island on Monday 15th June. The expedition has been action packed with many incidents along the way. Weather conditions have tested them along the way  along with trying to find dry campsites.
A typical campsite would have been anything from a small granite ledge, a clearing in the forest or a piece of rocky beach.  There had been various occasions that their tents had been flooded during the night resulting in team members having to sleep in their kayaks.  The team has suffered various ailments along the way including blistered hands, tendon strains and abrasion rashes.

Wildlife sightings included a whale that popped up right next to Geoff’s kayak.  Numerous seals, a pod of orcas, family of sea otters and a black bear, dolphins and hundreds of sea birds had also been spotted.

The Big 5 Kayak Team have already raised £6.5K for the Muscular Help Foundation, if you can spare a few quid it would help that totaliser climb!!
Please follow this link to donate http://www.justgiving.com/big5kayak